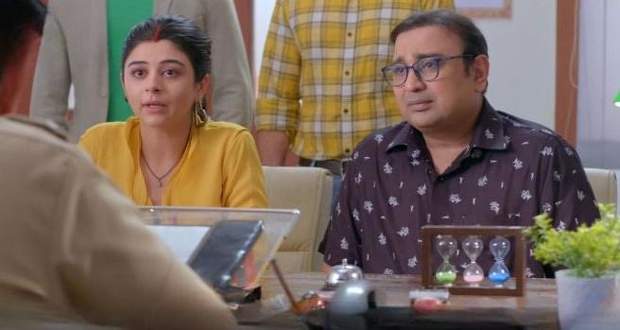 Further, Gungun is asked to wear a helmet and a safety jacket so that terrorists are unable to recognize Gungun.

Meanwhile, Golu, Yug, and Ankit pray to protect Gungun and Anubhav as they have never harmed anyone.

On the other hand, the terrorists discuss escaping the country as they might get caught and elope by waterways.

Later the terrorists discuss cutting Anubhav into pieces and throwing him in the sea.

The terrorists find out about the police's arrival and discuss using Anubhav as their protection.

The terrorists attack the police men and police counter attacks.

On the other hand, Anubhav gets a heavy fever when a terrorist tries to wake him up and shifts him to the front room.

Anubhav wakes up and is warned by the scientist to be killed.

Meanwhile, Gungun is at the gunpoint of a terrorist and saved by the commissioner.

Later, the terrorists notice Gungun and show her to Anubhav to scare him.

Gungun notices Anubhav and gets emotional as he is kept at gunpoint.

Meanwhile, the terrorists demand the police leave or they will kill Anubhav.

Anubhav demands to kill all the terrorists as he is not worried about his life.

Gungun and Anubhav see each other from a distance and get emotional.

Further, terrorists and policemen get into a fight, and territories are caught as Anubhav pushes the head terrorist towards the police.

At last, Anubhav meets Gungun while the terrorist shoots Anubhav on his back as Anubhav came in front of Gungun to save her life.

Anubhav is rushed to the hospital while the terrorist smirks.

Later Chanchal, Yug and Ankit arrive and Gungun cries on her way to the hospital.

On the other hand, the Kulshresths try to get information about Anubhav and find out about him getting shot by the terrorists.

Anubhav's family members start crying after hearing the news about Anubhav's injury while Charudatt requests them to have faith in God.

Later, Sargam requests to meet her son Anubhav but Chandragupt says they don't have Chanchal's exact location and cannot reach out to him.