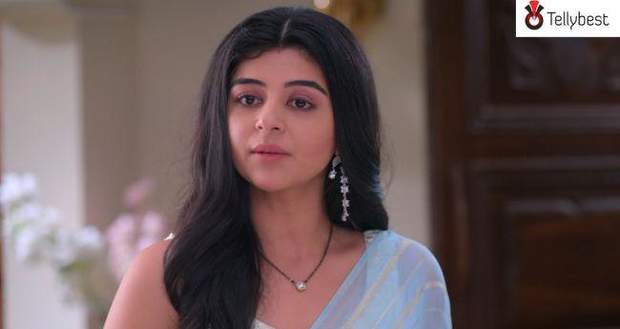 Today's Kabhi Kabhi Ittefaq Sey 12th August 2022 episode starts with the Doctor warning Gungun of getting a blood test done tomorrow as her symptoms can be a sign of a serious illness.

Thereafter, Gungun calls Charudatt to inform him about her hospital visit but Charudatt scolds her for being late due to the office and not thinking about Anubhav at all.

Furiously, Gungun informs Charudatt that she’s coming late so they don’t have to wait for her.

Gungun goes to meet Garima and informs her about her press award nomination.

Meanwhile, Gungun calls Armaan sadly who congratulates her on her wedding anniversary and asks the reason behind her sadness.

Gungun accidentally calls Armaan "Anubhav" while Armaan changes the topic and asks if she has eaten.

As Gungun gets emotional, she tells Armaan that she misses him and asks him why he has to go.

Armaan says he can hide things from her in the US but not in India.

Gungun interrupts Armaan as she knows he likes her while Armaan gets shocked realising that she already knows about his liking towards her.

Meanwhile, Gungun tells Armaan about her hospital visit but Armaan disconnects the call with her abruptly, cancelling all his appointments for the next 3-4 days.

Gungun reaches Kulshreshtha's house while everyone worriedly asks about her health.

However, Gungun asks about Anubhav's whereabouts while Sargam makes an excuse about him sleeping.

Gungun requests Anubhav to open the door while furious Anubhav declares he will sleep in Yug’s room or the gallery.

Anubhav mocks to make an announcement on her channel and call people when she asks him to accompany her to the hospital.

The next morning, Suganda urges Gungun to have breakfast with everyone while Gungun informs her she needs to go early today.

Sargam scolds Gungun for not eating.

Gungun informs the Kulshrestha family about her blood test today and goes from the house angrily as they do not listen to her.

The doctor informs her to wait for the blood test report after Gungun gets her blood tested.

The doctor informs Armaan about her estimation from Gungun’s symptoms that the problem is serious.

Worried Armaan tells the doctor to call him as soon as the reports come as he will reach India tomorrow.

© Copyright tellybest.com, 2020, 2021. All Rights Reserved. Unauthorized use and/or duplication of any material from tellybest.com without written permission is strictly prohibited.
Cached Saved on: Sunday 2nd of October 2022 12:38:54 PM