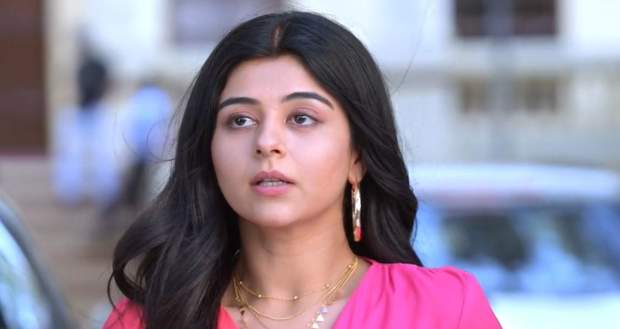 Today's Kabhi Kabhi Ittefaq Sey 12th May 2022 episode starts with Sargam and Sunanda talking about how Akriti has adjusted well in their family and comparing her to Gungun.

Meanwhile, Akriti requests Goli to come along to the dinner party.

Later, Anubhav orders the special dishes of the restaurant for Gungun.

Even though he is always on a budget, Anubhav didn't think twice before ordering everything for Gungun as he considers her special.

Meanwhile, Gungun is surprised to see the variety of dishes Anubhav insists on.

Further, Anubhav feeds Gungun with his hands and stops her from going abroad.

Gungun gets annoyed and says she cannot meet him like this and cannot bear the blame of being a homewrecker.

Meanwhile, Sunanda and the other women in the Kulshresth family have fun on their way to the restaurant.

Later, Gungun gets annoyed and walks away after Anubhav shows care and affection for her.

Meanwhile, Anubhav warns Gungun that he will harm himself as well if she tries to take a drastic step.

On the other hand, Akriti finds out Anubhav's cell phone in the restaurant.

Anubhav arrives to take back his phone and is shocked to see Akriti at the restaurant.

Later, Anubhav decides to leave and lies that he was there for the US delegates.

Akriti on the other hand gets irritated and shouts at the family members while they try to feed her various dishes from the restaurant.

The next morning, Akriti tries to console Gungun and pity her for losing her father while Gungun sarcastically brushes her off.

Meanwhile, Charudatt hands over some essentials to Gungun for the post-cremation rituals but Gungun refuses to accept them as she had arranged them already.

Later, Maya arrives and claims her daughter by saying she has lost her father but her mother is still standing by her side.