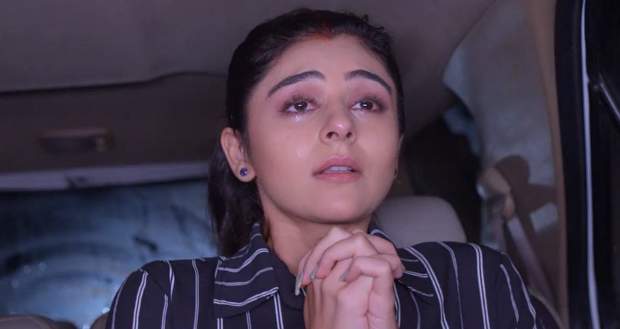 Today's Kabhi Kabhi Ittefaq Sey 13th June 2022 episode starts with Akriti crying after finding out about Anubhav getting shot by the terrorists and immediately calls Garima.

Akriti scolds Garima by saying that she has been the worst mother as she hid the fact of Gungun accompanying Anubhav to Mumbai and this accident could have been avoided if she told her everything beforehand.

On the other hand, Ranvijay thinks of going to Mumbai and killing Anubhav or he will get caught for giving Anubhav's information to the terrorists.

Further, Akriti tries to bring out the topic of being the daughter-in-law of the Kulshresths to Charudatt and says she wants to make sure she is the real wife and not Gungun.

Chandragupt on the other hand says that Gungun has worked really hard to get Anubhav out of the terrorist's trap and now has their sympathy for Gungun.

Meanwhile, the police commissioner finds out that the person who gave Anubhav's information is Ranvijay and gives his arrest orders.

Anubhav is admitted to the hospital while Gungun helps the receptionist to write down his details but Akriti arrives and says her name when asked about the wife's column.

Charudatt orders Gungun to leave while Chanchal stands by her side by saying Gungun was the only one who stood for Anubhav when no one believed about his kidnapping.

Akriti gets jealous and talks rudely to Chanchal while Chanchal scolds Akriti but Charudatt scolds Gungun.

Chandragupt appreciates Gungun's efforts and Dean also supports his views and stops Charudatt to let Gungun go out while Akriti jumps in and fights with the Dean.

Charudatt tries to hurt Gungun by saying that her parents didn't give her enough values which makes Gungun angry and she replies that she can bear anything but not false allegations about her dead father.

Akriti says Gungun to shut up while Gungun says shut up back to her.