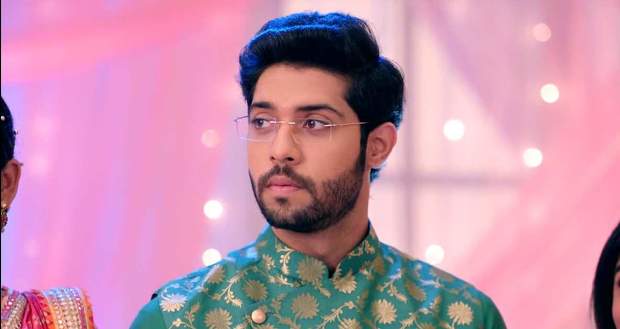 Today's Kabhi Kabhi Ittefaq Sey 14th April 2022 episode starts with Gungun and Rhiddhesh leaving the Kulshrestha house while Shankar talks about clearing things with Garima and staying with Akriti and his family.

Rhiddhesh wishes the best for Garima and says she can do whatever she wants.

Meanwhile, Gungun feels bad for losing everything including her bua.

Later, Garima walks away saying she has found out Akriti's real plan of creating differences between her and Gungun.

Garima says Akriti has got herself Anubhav's marriage proposal by betraying her own sister Gungun.

As Garima decides to leave, Shankar taunts her by saying she still has more love for Gungun than her own daughter Akriti.

Meanwhile, Garima voices she is proud of her daughter Gungun and her upbringing who knows how to love instead of Akriti who plans on taking away other people's love.

Akriti sabotages her relationship with Garima and says she wishes she didn't have a mother making Garima leave the ceremony.

Later, Gungun and Rhiddhesh reach back, and Maya tries to taunt them by asking about Akriti's groom Anubhav.

Maya tries to instigate Rhiddesh against Garima by calling her selfish.

Meanwhile, Maya exposes Akriti was dating Anubhav before and Anubhav was unable to take a stand due to family pressure.

Maya tries to turn on the Sangeet ceremony footage while Rhiddhesh stops her.

Meanwhile, Gungun is in an utter state of trauma and shock and runs away in the car.

Gungun feels betrayed by her bua Garima, her sister Akriti and even Anubhav.

Gungun drives dangerously on the roads while she mourns her loss and feels cheated on by Anubhav.

Driving recklessly, Gungun skips the red light while Rhiddhesh tries to locate her and is worried.