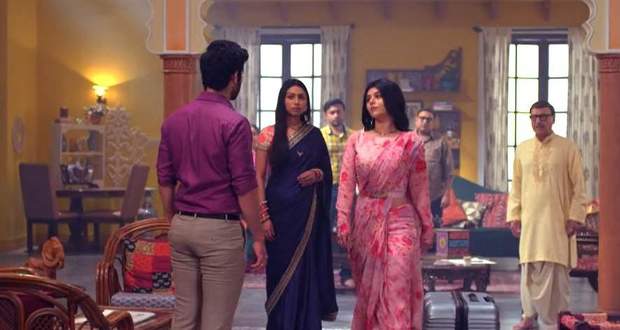 Gungun finds it hard to tell the truth to Maya.

Maya then asks Gungun to clear all the misunderstandings between her and Ranvijay if she does not want to marry him and later calls Ranvijay on behalf of Gungun.

Ranvijay blackmails Gungun that if she does not marry him, he will leak her pictures which will then ruin her late father’s reputation and also Anubhav’s marriage.

With her late father’s reputation at stake, helpless Gungun decides to leave for the US with her mother.

In the meanwhile, Akriti tries to manipulate Anubhav into thinking that Gungun was never a perfect match for him.

She tells him that Ranvijay and Gungun would suit each other well as both of them are careless, irresponsible and party animals.

Annoyed Anubhav asks Akriti to leave and says that he wants space.

When Akriti refuses to leave, he snaps at her and leaves.

Akriti is not bothered since she is relieved that Gungun is leaving for the US.

Frustrated by the words of Akriti, Anubhav calls Gungun.

Anubhav angrily talks to her and asks her why did she cover up for herself if she did want to marry Ranvijay.

He tells her that she only needs attention in her life and he made a big mistake by loving her.

On hearing this Gungun curses at Anubhav. She says that he will regret saying this to her one day and cuts the call.

Gungun looks at the picture of her father and starts crying. She tells him that nobody understands her and that she wishes he was alive.

Ranvijay goes to Gungun’s house along with his parents to talk about the wedding.

Maya sees Gungun helplessly crying in her room and tries to console her.

She then helps her get ready and brings her down. Ranvijay’s mother asks Gungun why she is crying.

Maya replies on her behalf and says that Gungun has been missing her father.

Ranvijay’s parents console Gungun by saying that she is their responsibility after marriage and they will try their best to not let her feel lonely.