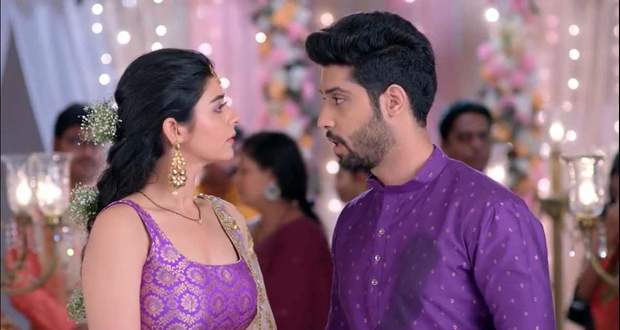 Clapping loudly to mock them, Akriti accuses Anubhav of lying and cheating on her with Gungun in front of everyone creating a commotion.

Anubhav tries to talk but Akriti doesn't let him talk and says that he didn't listen even after her past warning.

Akriti states that she will file a case against them while the public agrees with her.

Anubhav says that they met at the wedding and Gungun had come to drop them off at the hotel.

However, Akriti questions Gungun's character and says something insulting which angers everyone.

Gungun tries to calm Akriti but in anger, Akriti picks up a metal vase and attacks Gungun injuring her head.

Anubhav gets angry and tells Akriti to call the police as he will also file a case against her for trying to kill Gungun.

Anubhav and Akriti get into an argument while Gungun falls unconscious making Akriti fear going to jail.

A man says that he's a doctor and checks on Gungun saying that she's fine but will need to be kept under observation as she had a head injury.

Anubhav is about to speak up but Golu stops him telling him that they have to hide the news about him staying with Gungun.

Elsewhere, the terrorists get angry seeing Ranvijay play video games and tell him that they have to do something about Anubhav soon.

Meanwhile, Akriti takes pictures of Anubhav-Gungun and threatens him with them saying that she's going to the police with the pictures.

The terrorist calls one of his people and tells him to keep an eye on Anubhav and inform him if he leaves the hotel room.

Back at the hotel, Akriti leaves while Gungun tells Anubhav to go after her and see if she's okay.