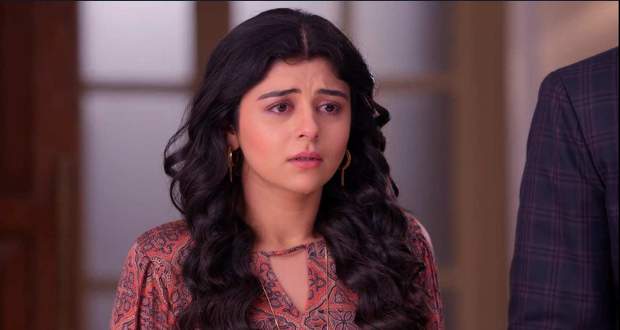 Today's Kabhi Kabhi Ittefaq Sey 16th April 2022 episode starts with Gungun gaining her consciousness back while Rhiddhesh sits by her side.

Meanwhile, Rhiddhesh taunts Anubhav for being at the hospital instead of helping with the arrangements of his marriage.

Later, Anubhav says why everyone thinks that the is at fault, while Yug and Ankit take Dr. Rhiddhesh's side.

Ankit says Rhiddhesh's anger is justified as he got married to none other than Gungun's sister which has hurt Gungun deeply.

Golu says Gungun doesn't even realize how much she loves Anubhav and is unable to express her true feelings.

Meanwhile, Anubhav walks into Gungun's room and tries to ask her about her well-being.

Gungun is furious and asks the nurse to kick him out while Anubhav says he will take only two minutes.

Anubhav asks why she was upset which led her to drive so fast that her car got unstable.

Meanwhile, Anubhav tries to hear Gungun accept that she is hurt by Anubhav's and Akriti's marriage but Gungun is nowhere close to expressing herself and tells Anubhav to leave.

As Anubhav is about to leave, Gungun asks why he didn't invite her to his Sangeet ceremony.

Later, Golu, Ankit, and Yug arrive to see their dear Gungun while Gungun asks them the reason not to invite her to the Sangeet.

Gungun says she will surely attend Akriti's marriages as she is her sister.

Meanwhile, Rhiddhesh gets furious on seeing Anubhav in Gungun's room, he says Anubhav to stay away from Gungun.

Gungun hugs her father and apologizes for her driving. Gungun says it's Rhiddhesh who loves her unconditionally.

While Gungun gets her discharged and is about to leave, Yug tries to clarify his side regarding Anubhav's marriage with Akriti.

Dr. Riddhesh says it's not important and he is trying to focus on his daughter Gungun instead.

Later, Gungun and Rhiddhesh reach their place where Gungun requests Rhiddhesh to buy a gift for Anubhav.

Rhiddhesh agrees for the sake of her daughter while he warns about Kulshresthas reactions towards Gungun.

Meanwhile, Gungun suggests Rhiddhesh should not be upset with Garima as she is the best and would want the best for her daughter Akriti as well.

Gungun hugs her dad and sleeps while she expresses her gratitude towards Rhiddhesh as he will choose Gungun over anything.