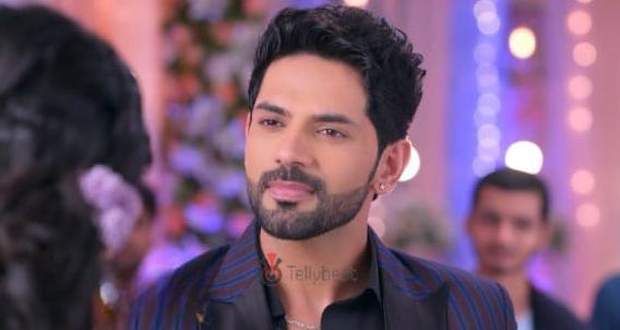 Later on, the Chairman announces a surprise for Gungun while Gungun thinks that Anubhav is the person who is covering her eyes.

Gungun's happiness has no bounds afters seeing that Armaan is the one who is covering her eyes.

Shocked at Gungun’s actions Golu, Yug and Neeti give glares at Gungun for not even sparing a glance towards Anubhav.

Gungun hugs Armaan and cuts the cake and gives the first slice to Armaan.

Golu supports Gungun portraying the relationship between Gungun and Armaan as friendship.

At the same time, Armaan starts to dance with Gungun affectionately.

Anubhav's hands start to shake in anger and betrayal seeing Armaan and Gungun dancing so close to the romantic song “Gerua''.

When Armaan is picking Gungun in the bridal style she sees Anubhav and panicky stop the dance.

Furious Anubhav goes out while disappointed Golu, Yug and Neeti follow him.

Gungun tries to run behind Anubhav to stop him but Gungun is surrounded by her colleagues.

After getting free from the crowd Gungun follows Anubhav but Armaan stops her and asks her to give him her passport for her treatment.

Puzzled Gungun asks  Armaan how he knows about her tumour but Armaan interrupts her and assures her he’s taking her to the US at any cost for her treatment.

Meanwhile, Gungun tells Armaan she needs to go back to Kulshreshtha’s house.

On the other hand, the whole Kulshrestha family is standing furiously after hearing about Gungun’s dance with Armaan.

When Gungun enters the house Charudatt orders Gungun to not go to the office from tomorrow and accuses Armaan of having ill intentions towards Gungun.

Gungun tries to assure the family about she and Armaan only being friends but no one listens.

Anubhav confronts Gungun about Armaan liking her and taking advantage of the rift between both of them right now.

Charudatt orders Gungun to never meet Armaan again and demands to choose one thing between family or work.

Gungun starts to recall all the cute gestures of Armaan and the Kulshrestha family accusations.

Gungun's heads start to hurt with all these thoughts of dilemma.

© Copyright tellybest.com, 2020, 2021. All Rights Reserved. Unauthorized use and/or duplication of any material from tellybest.com without written permission is strictly prohibited.
Cached Saved on: Sunday 2nd of October 2022 05:45:30 PMCached Disp on: Thursday 6th of October 2022 03:19:17 PM