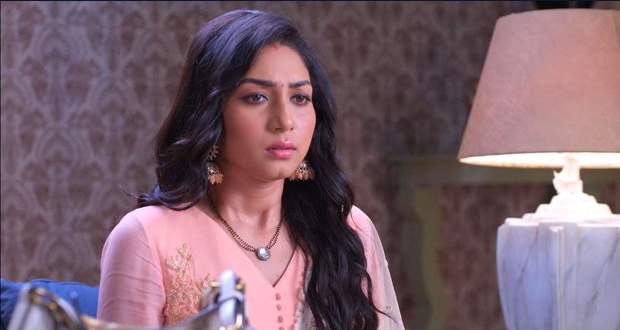 After telling it, Anubhav gets into a taxi to the airport.

At the same time, a goon who was watching Anubhav calls his master to inform them about him.

Ranvijay orders him to kill the scientist today.

However, during the car ride, Anubhav calls Akriti’s dad to inform him about Akriti’s missing.

Hearing Akriti’s name, Sankar furiously orders him to find his daughter at any cost otherwise he will destroy him.

While Anubhav is looking at the thread and recalling Gungun, the goon’s car starts following him.

Seeing the car behind him, Anubhav orders his taxi driver to run faster but the car quickly catches up with him.

The goons’ car suddenly stops at a distance as Anubhav’a car gets hit by a truck.

Elsewhere in the home, Gungun wakes restless from her sleep.

She then tries to call Anubhav multiple times but fails.

Golu and Ankit who were sitting close to Gungun urge her to rest but Gungun ignores them.

She even says that this is her fault as she knew Anubhav’s life is at risk now.

Saying this, she starts crying and Golu advises them to call the police officer and she tells him everything about Anubhav and Akriti.

Meanwhile, two strangers find the accident car and call the police to inform them.

However, at the crime scene, the police officers don’t find Anubhav’s body anywhere.

When the police tell Gungun about it, she is shocked at the news.

While Gungun, Golu, and Ankit are in the car, Akriti calls her to give her an earful.

Gungun informs her about Anubhav’s accident but Akriti blames her for it.

Hearing this, Gungun tells her the accident location and cuts the call.

Later after reaching the location, Gungun asks the police chief about Anubhav.

Seeing Gungun’s face, the police chief promises her that if Anubhav is alive then he will find him at any cost in 24 hours.

At the same time, Akriti arrives there and starts blaming Gungun for everything.

She asks the police officer to arrest Gungun as she thinks Gungun knows Anubhav’s location.

Golu and Ankit try to calm Akriti down but she keeps repeating the same thing.

However, Golu announces that Akriti is the one responsible for Anubhav’s missing.

© Copyright tellybest.com, 2022, 2023. All Rights Reserved. Unauthorized use and/or duplication of any material from tellybest.com without written permission is strictly prohibited.
Cached Saved on: Monday 21st of November 2022 10:23:25 PMCached Disp on: Friday 9th of December 2022 07:07:15 PM