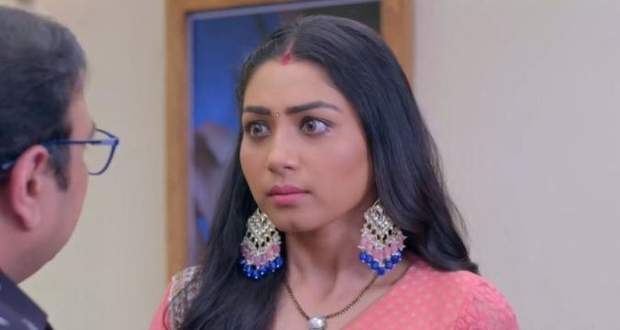 Further, Gungun requests the nurse to add the blessed flowers to Anubhav's head.

Chanchal arrives and says Gungun lit up the hope in their hearts and Anubhav will be saved.

Meanwhile, Gungun gets unconscious due to weakness, and Chanchal visits to see Anubhav.

The doctor appreciates Gungun's efforts for donating blood to Anubhav.

The doctor informs the Kulshresths that Anubhav is out of danger.

Later, Anubhav murmurs Gungun's name while the nurse asks if Gungun is his wife, and Anubhav requests to see her.

Meanwhile, Gungun wakes up and says she wants to see Anubhav from outside but Chanchal asks why she doesn't want to meet him.

Gungun says Akriti and Charudatt will not let that happen while Chanchal says she has the full right as she was the one who saved his life and not Akriti.

Further, Gungun says she will give Anubhav to his family as she is not selfish to separate Anubhav from his family.

Meanwhile, the nurse asks for Gungun from Charudatt while he says Anubhav must be asking for his wife Akriti and scolds the nurse in anger.

On the other hand, Ranvijay is interrogated by the police and asked about his call history with the terrorists.

Ranvijay denies accepting any allegations but is beaten by the police to get the truth out.

Meanwhile, Charudatt calls Sunanda and Sargam to inform them about Anubhav's recovery which gives them a breath of relief.

Sunanda asks about Gungun and Charudatt says she has not left and is stubborn and in addition to that has given Anubhav her blood as well.

Goli seems to be impressed by Gungun's efforts.

Charudatt says that he will get a Greh Shanti Puja as soon as he will arrive back with Anubhav.

© Copyright tellybest.com, 2022, 2023. All Rights Reserved. Unauthorized use and/or duplication of any material from tellybest.com without written permission is strictly prohibited.
Cached Saved on: Monday 21st of November 2022 10:13:36 AMCached Disp on: Monday 5th of December 2022 01:06:10 PM