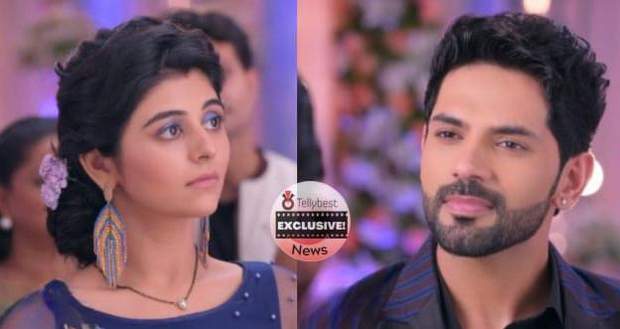 Worried Golu sits on the bed and shakes Gungun while Anubhav nonchalantly says she will wake up soon as it’s not a big deal.

Golu, Chandrapgupt and Yug scold Anubhav for his nonchalant behaviour.

At the same time, Gungun wakes up and ignores Golu and goes downstairs straight.

Gungun says to Charudatt that she is going to become a puppet of the Kulshrestha family and going to do whatever they want and informs them she’s going to leave her job today.

Gungun reaches the Chairman's office and decides not to say anything about resignation in front of Armaan.

Armaan confronts Gungun about coming back to India because of her and now she has to go with him for her treatment and advises her not to think about Kulshrestha's family as they did not even come to her party.

Armaan demands Gungun to choose between living with Anubhav or having good treatment in the US with him.

At Kulshrestha's house, Gungun asks for the Kulshrestha family's permission to get treated for her deadly disease in the US.

The Kulshrestha family insults Gungun for going with Armaan despite knowing he likes her.

Anubhav tells Gungun to give him a divorce if she wants to go to the US for her treatment while Charudatt accuses Armaan of having a relationship with a married woman.

Gungun decides to reason with Anubhav's family but Charudatt orders Gungun that she will divorce Anubhav if she wants to go to the US.

Anubhav asks Gungun what's the seious disease she needs to go to the US for its treatment.

Gungun accuses Anubhav of never asking and caring for her health while telling everyone she has a last-stage brain tumour.

The Kulshreshtha family gets shocked and starts to sympathise with Gungun.

Charudatt assures Gungun that the whole family is going to take care of her but the treatment is going to be done here only.

Gungun confronts Anubhav saying Armaan is supporting her and Jeet Network is paying for her treatment in the US.

Everyone disperses to their room without saying anything.

In Jeet Network, Gungun is sitting with a disappointed face because of the lack of support from the Kulshrestha family while Armaan is ecstatic that Gungun is going to the US for treatment.