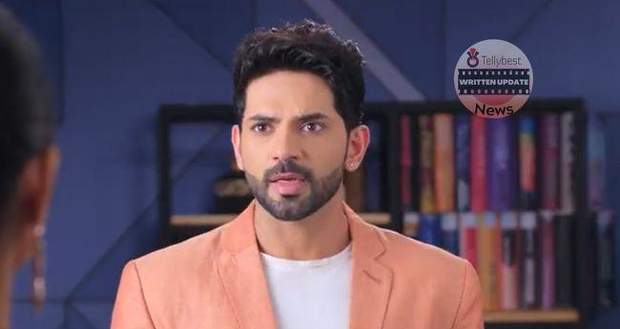 Today's Kabhi Kabhi Ittefaq Sey 18th August 2022 episode starts with Goli getting a call from Ankit and Khushi and getting shocked after knowing about Gungun’s brain tumour.

Ankit requests Goli to make the Kulshrestha family understand Gungun’s critical situation and allow her to get surgery in the US.

At the same time, Armaan has organised a romantic dinner in the office but names it Gungun’s farewell.

Gungun gets happy seeing white sauce pasta as it is her favourite dish while Armaan shows off his cooking skills.

Seeing Armaan’s care Gungun gets emotional and Armaan urges Gungun to wipe her tears for his sake.

At Kulshrestha's house, Goli sympathizes with Gungun and accuses Kulshrestha's family of not knowing about Gungun’s deteriorating health.

Charudatt stops Goli from apologising to Gungun as he is the one who scolded her the most unnecessarily.

Meanwhile, Charudatt informs Gungun that they will take Gungun to Mumbai for her treatment.

At the same time, Armaan calls Gungun to inform her of all arrangements being made in America and that the departure of the flight is set for the day after tomorrow.

Gungun declares to Kulshrestha's family that she is going to America for her treatment.

Meanwhile, Anubhav gets angry and confronts Gungun while Gungun shows Kulshrestha's family her reports and tells them to consult any doctor regarding her critical situation.

Anubhav accuses Gungun of going to America to have a fling with Armaan.

Gungun slaps Anubhav and she tells him she can be a workaholic and stubborn woman but not a cheater.

Furious Gungun goes to her room while Golu calls Gungun’s doctor and inquires about her health.

The doctor explains Gungun’s critical state and tells him that she needs immediate surgery in the US for good survival chances.

Anubhav starts to cry putting his head on Golu’s shoulder while the whole Kulshrestha family cries for Gungun's pain.

Recalling his hurtful words Anubhav goes to the room and apologises to Gungun.

Seeing Gungun having a headache Anubhav tries to massage her head but Gungun stops him.

Anubhav allows Gungun to have treatment in the US but Gungun says she is going to America without his permission.

Gungun accuses him of getting jealous of her career achievements and forcing her to leave her job.

Helpless Anubhav listens to Gungun's accusations as they are completely true.