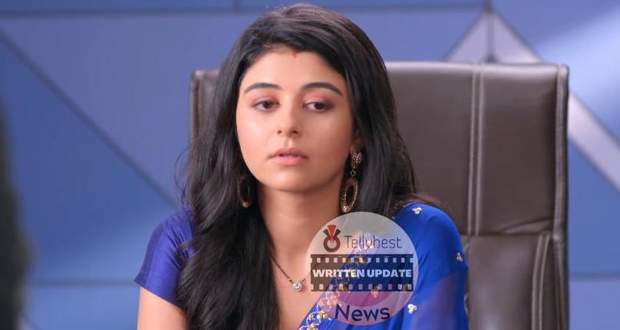 Today's Kabhi Kabhi Ittefaq Sey 19th August 2022 episode starts with Gungun accusing Anubhav of not taking a stand for their relationship when Charudatt asked her to divorce him.

Anubhav holds Gungun’s hands shedding tears when Gungun says she is standing on the threshold because of her tumour.

Later on, Gungun is sitting in a cafe recalling Kulshrestha’s family accusation while Armaan reaches and starts to cheer up Gungun with his cute antics.

Armaan shows Gungun a top, shoes and a neck supporter for the flight while Gungun tells him that Anubhav has already bought these things for her.

Hearing Gungun’s words, Armaan sarcastically says that Anubhav has given her permission to get treatment to live life.

Gungun assures Armaan that Kulshrestha is going to give permission but he confronts her saying he will talk to Kulshrestha's family in the evening.

When Armaan starts to go he advises Gungun to take the things home and not lie about his husband’s love.

At the same time, Anubhav pursues the youngsters of the Kulshrestha family to let Gungun go to America with Armaan while he talks about working on his new project related to Gungun's disease.

Golu accuses Anubhav of not focusing on Gungun and asks him to stop focusing on the new project.

Gungun reaches the room when Golu calls Anubhav and Gungun competitors rather than husband-wife.

Golu goes from the room with others to give Gungun space to talk with Anubhav.

Later, Gungun tells Anubhav that she might die but Anubhav interrupts her with a hug saying not to talk nonsense.

Anubhav says he wants to hold Gungun’s hand when she goes into the operation theatre while Gungun gets happy with the news of Anubhav going with her.

Meanwhile, Gungun confronts Anubhav for rejecting his chance at an International award for her.

Anubhav assures Gungun that she is her life and happiness but Gungun says she will blame herself all her life if Anubhav does not participate in this competition.

At the same time, Armaan reaches the Kulshrestha house and pursues Charudatt to permit Gungun as her health is critical.

Charudatt asks Gungun if she wants to go to America with Armaan or Anubhav while declaring that he will not let the daughter-in-law of the Kulshrestha family go to a foreign country with a stranger.

Recalling Anubhav's love for his dream project, reluctant Gungun tells everyone she wants to go with Armaan, not Anubhav.