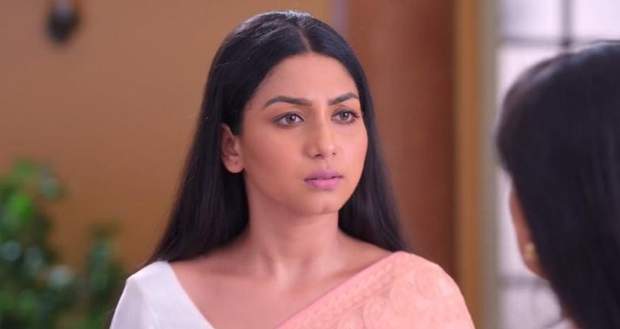 Today's Kabhi Kabhi Ittefaq Sey 1st August 2022 episode starts with Bina getting ready and Radha doing the wedding preparations. Radha asks Madhav to go to her sister's house and get ready there.

Meanwhile, Armaan sees Gungun ready to go to Bina and Madhav's marriage and compliments her on looking beautiful.

Armaan asks Gungun about Binna's husband's looks and their marriage arrangement whether it's love or arrange marriage.

Gungun replies it's a combination of both.

Gungun reminds Armaan he was going to tell her something as he told her yesterday but he says he will tell her some other time.

While Gungun inquired about the gifts, Armaan confirms he has the gifts.

Meanwhile, Madhav is not able to find his way to Radha's sister's house and accidentally stumbles on a rock in the road and hurts its head.

Meanwhile, Banni sits on the pavilion, Anmol finds Madhav unconscious on the mud on the side of the road while Radha and Binna are worrying and waiting for him.

Gungun again asks Armaan to tell her about the thing.

Anmol brings Madhav with mud on her face while Madhav starts recalling some memories and tells everyone he has a family but does not know where they are.

Ved Ji tells them to bath Madhav with milk and Ganga water to cure his Smriti Bhram.

After seeing Madhav's face Gungun gets shocked and happy. Gungun runs and hugs Madhav. Even Madhav hugs her desperately and they both recall their precious moments.

Madhav asks Gungun where she went but Mukhiya Ji separates Anubhav and Gungun.

Afterward, Armaan tells everyone about Madhav being a renowned scientist.

Radha asks Gungun about Anubhav's identity and Gungun tells her Anubhav is her husband and it's a miracle he is alive.

But, Mukhiya Ji adamantly says to give him proof of him being Anubhav and orders him to marry Banni forcedly.

Binna interrupts and refuses to get married to Anubhav because of finding out his real identity.

Radha sadly expresses her concern about Binna not getting married and people making her life difficult after all the fiasco.

However, Radha allows Gungun to take Anubhav with her back to his home.

© Copyright tellybest.com, 2022, 2023. All Rights Reserved. Unauthorized use and/or duplication of any material from tellybest.com without written permission is strictly prohibited.
Cached Saved on: Wednesday 25th of January 2023 07:54:35 PMCached Disp on: Thursday 9th of February 2023 09:07:38 AM