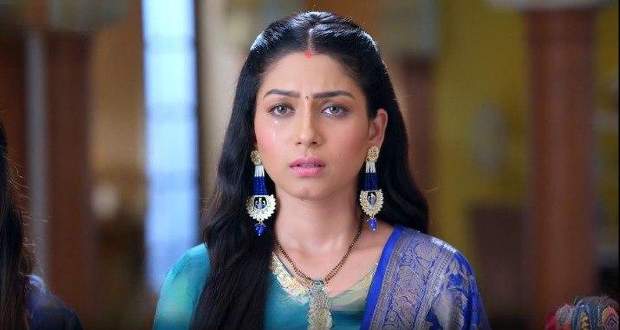 Anubhav gets annoyed as Gungun always gets humiliated because of him and feels helpless.

Chanchal suggests that Anubhav marry Gungun and give Akriti the divorce she wants.

Later, Akriti meets Ranvijay in a cafe where Akriti tells Ranvijay to keep Gungun in control as she is always running behind Anubhav.

Ranvijay smirks and says Anubhav is not that a handsome hunk that Gungun has to approach him.

On hearing this Akriti gets defensive and says Gungun is also not that special.

Later, Akriti says she wants to take revenge to which Ranvijay agrees to join her.

Akriti asks Ranvijay to marry Gungun to which Ranvijay says even if he does Gungun and Anubhav will continue to have an affair and it's Anubhav's plan to keep Akriti at bay.

Ranvijay says that he will permanently shut down Gungun's book and suggests killing her.

Akriti says that he is just good at talking but Ranvijay says he is not scared of the police.

Akriti says that she will try to work according to her plan first and if it fails then she will join Ranvijay.

Later, Akriti knocks at Gungun's door and warns her to stay away from Anubhav or she will complain about her to the police.

Gungun says she didn't insist on meeting Anubhav but it was Anubhav who reached out to her and shuts the door in her face.

Akriti thinks of Ranvijay's plan of killing Gungun and getting rid of her forever as this is the only solution left.

Further, Akriti arrives back home and Anubhav tries to interrogate her about her outing.

Akriti says that she is not answerable to anyone as Anubhav never informs her when he meets Gungun.

Anubhav gets annoyed and says Akriti never listens and starts with her complaints right away.

Anubhav regrets marrying Akriti due to his family's ego to which Akriti holds Anubhav by his collar.

Anubhav frees himself from Akriti's grip and answers that he just agreed to marry Akriti for the sake of his family.

Akriti feels hurt while Anubhav explains how they have never stopped fighting since day one and staying together is of no use.

Further, Anubhav says that he feels caged as Akriti is his responsibility but Gungun is his love and he will stay beside her no matter what.

© Copyright tellybest.com, 2020, 2021. All Rights Reserved. Unauthorized use and/or duplication of any material from tellybest.com without written permission is strictly prohibited.
Cached Saved on: Monday 1st of August 2022 02:42:27 PMCached Disp on: Sunday 14th of August 2022 11:39:34 AM