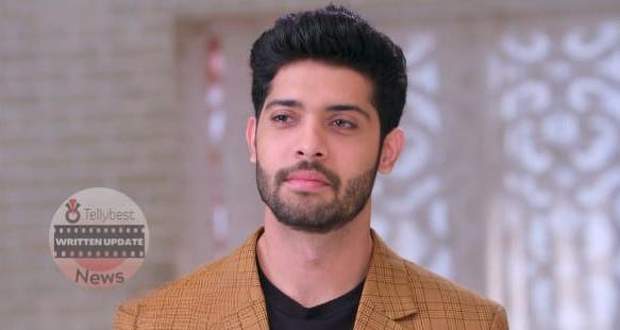 Today's Kabhi Kabhi Ittefaq Sey 20th August 2022 episode starts with Charudatt accusing Gungun of choosing a stranger above his husband and declares Gungun to divorce Anubhav before going with Armaan.

Everybody gets shocked while Gungun says she knew this was going to happen so she did beforehand and give the signed divorced paper to Anubhav.

After two years, Sunanda picks up the ringing landline phone and Anubhav’s boss on the other hand tells her something which excites her.

At the same time, Anubhav gets a job offer of 2 crores which he rejects saying he wants to work for his country.

Anubhav goes downstairs with Chhavi and gets to know from his boss that he has won an International award for his contribution to the advancement of 'Micro-Robotics Surgery’.

Hearing the news Kulshrestha's family gets happy and starts to dance while Anubhav sees a figure of Gungun smiling at his achievement.

At the same time, Gungun is being welcomed at Jeet’s Network for her return and she also sees a figure of Anubhav smiling at her.

In the press conference, Anubhav gives all the credit for his award to Gungun and calls her the reason he worked on the advancement of Micro-Robotics.

On the other hand, Gungun is also in a press conference for her achievement in press reporting in America and is appreciated for coming back to India even after getting a job offer in the US.

Both Gungun and Anubhav go to the same orphanage while Gungun reaches first and meets the children and the caretaker.

Gungun plays with the children and they tell Gungun about their Darling Sir aka Anubhav.

Car horn beep, Children stand up waiting for Anubhav while he enters without noticing Gungun.

Both Gungun and Anubhav’s faces are adorned with smiles and tears in their eyes.

Gungun exclaims she never thought they would meet like this and congratulate Anubhav on his achievements.

Anubhav offers flowers to Gungun through a child but when Gungun gives them back saying he won them, Anubhav tells her she is the reason for his success.

The children urge Anubhav to sing a song for the special occasion.

Anubhav starts to sing ‘Tujhse Naraz Nahi Zindagi’ while recalling his journey of love with Gungun.

When Anubhav's voice cracks due to the overwhelming emotions Gungun continues his song with eyes red from crying.

Anubhav hugs Gungun feeling like meeting after an eternity and kisses her forehead lovingly.

Both Gungun and Anubhav join their forehead crying and living happily ever after.

© Copyright tellybest.com, 2020, 2021. All Rights Reserved. Unauthorized use and/or duplication of any material from tellybest.com without written permission is strictly prohibited.
Cached Saved on: Friday 30th of September 2022 07:03:32 PMCached Disp on: Saturday 1st of October 2022 12:43:49 AM