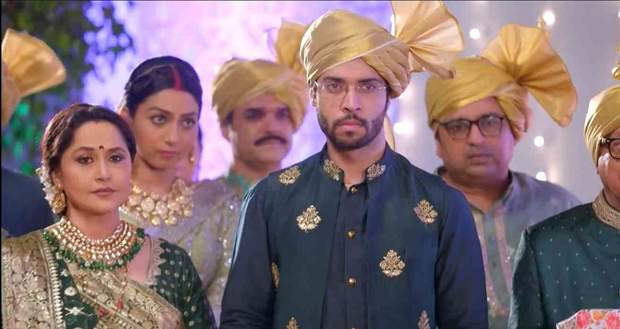 Today's Kabhi Kabhi Ittefaq Sey 20th May 2022 episode starts with Maya scolding Kulshreshths and telling them that Anubhav wanted to become a hero and left with Gungun.

However, Akriti tries to defend Anubhav by hinting that Gungun is the one who is after him and wants to be with him.

Maya tells Akriti that Gungun loves Ranvijay and is going to marry him only which angers Garima.

Thinking about Gungun's health, Garima questions Maya but doesn't get a reply soon.

Just then, Gungun's friends come there and show Maya the suicide note stating that she is doing this to herself and that no one is responsible for it but herself.

Ranvijay grins thinking that his American dream is still intact as he recalls misbehaving with Gungun and her threatening to expose him.

Back in the present, Maya announces that the wedding will not be postponed or canceled and tells Ranvijay that they will get him married in the hospital only.

Having enough of Maya's demands, Garima reveals that Maya never really cared for Gungun before and still doesn't care for her now.

Maya leaves while Akriti tries to stop Garima from going to the hospital but gets shocked only.

Back at the hospital, Gungun finally regains consciousness and asks for Anubhav while he also asks the doctor for a chance to meet Gungun.

The doctor lets them meet but Gungun refuses to let Anubhav touch her saying that he deserves punishment for not knowing how to claim what is his.

They both argue childishly about their partners while Gungun reveals that she agreed to marry Ranvijay to try to get him to accept his feelings.

Gungun further defeatedly says that whatever the situation is, Akriti is his wife.

However, in anger that Gungun doesn't understand his feelings, Anubhav reveals that he loves her and that it is fact he married her first before marrying Akriti.

Gungun and Anubhav hold hands while she reveals that she removed the vermillion so that Maya doesn't see it.

Gungun says that she feared Maya would make his life miserable alongside hers and that she didn't want to ruin his and Akriti's happiness.

Suddenly, Gungun starts coughing while Anubhav lays her down and tells her to rest.