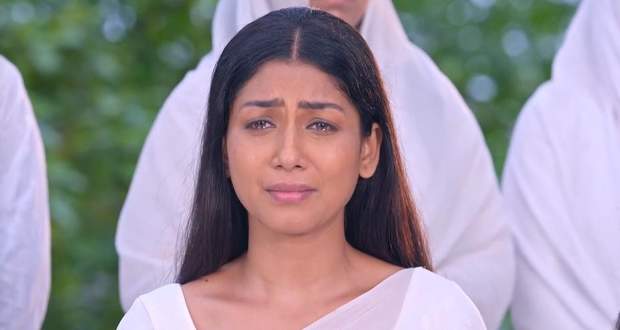 Garima tries to change their mind by calling Ranvijay and his father fraud but the police ignore her.

However, remembering Arman’s words, she calls him for help.

Hearing about Gungun’s arrest, Arman asks her to give the phone to the police to speak.

He then tells the police that they can’t arrest a girl without the court’s notice.

He even promises to bring Gungun to the police station when she will be stable.

Realizing Gungun’s emotional state, the police agree to do so.

After the police leaves, Garima informs Arman that Gungun does not smile anymore.

Meanwhile, in court, Mithilesh urges the lawyer to do anything to make Gungun drops the charges against his son.

On the other hand, Gungun hallucinates Anubhav in her room.

Anubhav advises Gungun to change into her old self who knows how to fight.

After Anubhav’s image vanishes, she looks at Anubhav’s portrait and promises that she will fight for Anubhav at any cost.

At the same time, Garima enters her room to check on her.

During makeup, a teardrop falls from Gungun’s eyes and she informs the artist that she has an allergy.

Elsewhere, Arman asks his lawyer friend to help Gungun in her case.

Looking at Arman strangely, his friend asks him if he likes Gungun as he does not talk about any girl.

However, he denies it by claiming that he is just helping a girl.

Later, he goes to Gungun’s room to check on her.

He then starts telling her about his girlfriend dying on the wedding night.

After telling the story, he asks her if she is willing to smile now like him.

He even offers her a position in the Jeet network.

Before Gungun can say anything, he advises her to take her time to think about it.

© Copyright tellybest.com, 2022, 2023. All Rights Reserved. Unauthorized use and/or duplication of any material from tellybest.com without written permission is strictly prohibited.
Cached Saved on: Thursday 26th of January 2023 05:38:51 PMCached Disp on: Thursday 9th of February 2023 08:39:27 AM