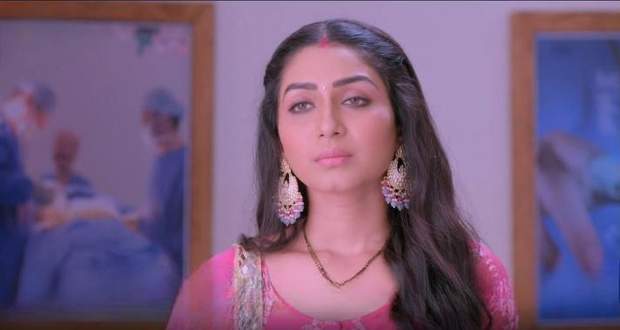 Chandragupt explains to him that it will only cause problems for their family as Anubhav and Gungun are well known now.

Akriti gets angry and tells them that it will put Gungun in her rightful place when people will know that she and not Gungun is Anubhav’s wife.

Gungun accuses Akriti of not performing her wifely duties.

Akriti calls the manager of the hospital while Gungun explains to Charudatt that she has only come to give medicine and food to Anubhav.

Just then Manager arrives and Akriti scolds him for letting an outsider comes dressed as a nurse and accuses him of poor management of security.

Akriti asks him to call the police.

Anubhav tells Gungun not to beg in front of anyone while she tells Anubhav to calm down.

Akriti tells the manager to call the police as she could have given the wrong medicine to Anubhav which could cost him his life.

However, Gungun threatens to go to the media while Anubhav and Golu support Gungun.

Anubhav tells Akriti that he loves Gungun and she can not keep Gungun away from him.

Charudutt gets angry at Anubhav’s confession and tells him that he will never forgive him if he goes to live with Gungun.

Anubhav apologises to him and tells him that he wants to live his life with Gungun now.

Akriti tells Anubhav that she is taking him to Lucknow.

Anubhav refuses to go with Akriti but Charudutts blackmails him with his death.

Gungun requests Anubhav to go with his family as she cannot see him divided between love and family.

Golu tells Charudutt that he cannot leave Gungun behind and will come with her.

Charudutt also threatens Gungun with his death to keep her away from Anubhav.

Afterwards, Gungun explains her dilemma to the taxi driver for not being able to accompany Anubhav to his home.

She tells him that she can not meet with Anubhav anymore and cause problems for Anubhav and his family.

Later, Anubhav arrives home where he is greeted by his family members with love and affection and tearful eyes.

Charudutts tells Sunanda and others that Anubhav is back for good and will not go anywhere now.

Akriti also tells him meaningfully that family is family and always comes first.