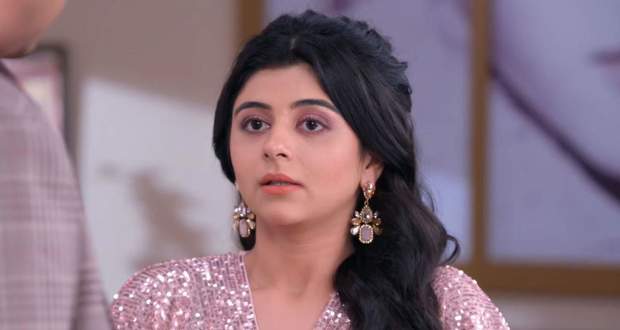 Further, Anubhav adds that Gungun is now his wife as he filled vermillion in front of the God while the mantras were chanted.

Later, Akriti is worried after she finds out that Anubhav is missing and tries to call Gungun on her cellphone.

Garima says Gungun is not a liar like Akriti and her father shuts Akriti up.

Meanwhile, the police arrive at the temple and arrest Ranvijay while his friends elope.

Later, Rhiddhesh asks Anubhav why he filled the vermillion in Gungun's forehead while Anubhav says he did what was right at that moment.

Further, Panditji arrives and suggests they should marry according to the rituals while Anubhav gets anxious and says he has to get married to Akriti.

Gungun arrives with a gift for Anubhav holding her emotions and tears while she walks away thinking of what just happened.

Anubhav looks at Gungun's sindoor while Gungun says she will wash it as soon as she reaches home.

Later, Anubhav is worried about the vermillion as it is a pure and pious ritual his family believes in.

Meanwhile, Anubhav thinks that marrying Akriti will be equivalent to lying as he is already married to Gungun.

On the other hand, the Kulshresthas and Akriti try to reach out to Anubhav while the neighbors talk about the groom.

Later, Rhiddhesh and Gungun reach back home but Gungun refuses to remove the vermillion from her forehead.

Rhiddhesh requests Gungun to remove the vermillion while he gets sick.

Gungun refuses to remove the vermillion and says she cannot remove it as Anubhav filled it in the temple in front of the Gods.