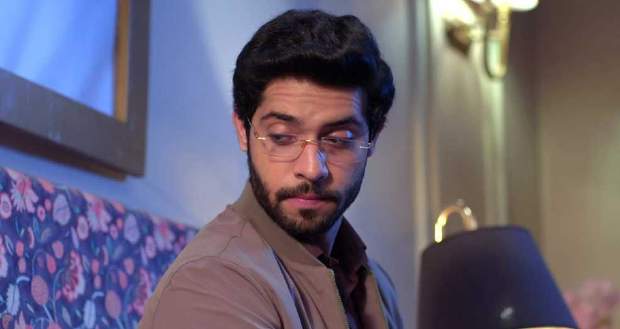 Today's Kabhi Kabhi Ittefaq Sey 22nd February 2022 episode starts with Anubhav telling Dr. Riddhesh that they should get some blood tests done on Gungun, to which Dr. Riddhesh tells him that there was no rush.

Gungun is sure that Anubhav doesn't really care.

The Kulshresthas wanted to leave but Gungun stops them.

Afterward, Chanchal, Yug, Neeti, and Ankit tease Anubhav for feeding Gungun the soup while Dr. Riddhesh and Garima excuse themselves.

The Kulshresthas tease Anubhav for lying to them while Gungun tells him that he was the one to lie.

When asked why he didn't tell anyone about his whereabouts, he tells them that it's because they pester him.

The Kulshresthas still keep on teasing him.

They get excited to hear that Anubhav requested him to have soup.

The next day at work, Akriti and Anubhav converse regarding Gungun.

Anubhav tells her that he did visit Gungun last night but gets agitated when Akriti comments on his personal life.

Akriti gets up to leave but Anubhav stops her.

He tells her that this institute was like a second home to him, and his colleagues were like his family, even Akriti.

He further tells her that he would have visited anyone who was sick not only Gungun.

Right then Gungun calls him and hears Akriti's voice and wants to talk to her.

Akriti tells Anubhav that just because Anubhav and Gungun were getting married, doesn't mean that everything was sorted between her and Gungun.

Gungun tells her how much Garima misses her, and pleads her to talk to Garima once.

At this, Akriti tells Gungun that she is no one to interfere.

Akriti rudely tells her to never talk about her to Anubhav.