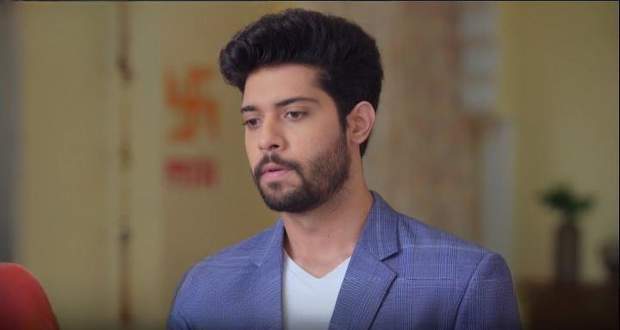 Today's Kabhi Kabhi Ittefaq Sey 25th June 2022 episode starts with Anubhav and Gungun longing for each other while Anubhav thinks where he went wrong in loving Gungun that she had to go back to Ranvijay.

On the other hand, Gungun thinks about Akriti's statement of being Anubhav's wife in a realistic manner.

Further, Charudatt calls out the family members and tells them about the Gungun award ceremony.

Chandragupt appreciates the government's decision while Charudatt asks if he should read that again as Gungun is addressed as Gungun Kulshresth.

Later, Akriti arrives and informs the family about the invitation that Anubhav is invited with his family.

Charudatt decides that they are not going to the award ceremony as Gungun is getting an award as a Kulshresth and not Bhatnagar which will be a reason for their humiliation.

Further, Gungun receives a call from the collector's P.A. who requests Gungun to receive the award.

Gungun accepts their request and agrees to attend the award ceremony.

Sargam and Chanchal ask Charudatt if the award is given by the government then what's wrong with it.

Charudatt is worried that the media will surely create a scene and he doesn't want that for his family.

Chanchal says that he will go no matter what as Gungun is getting awarded for her bravery while Akriti says he can go but not take Anubhav with him.

Chanchal taunts Akriti and says it is all because of being with a bad company while Akriti gets the hint and tattles it to Charudatt.

Further, Chandragupt says that Anubhav can decide for himself and no one will pressurize him into not going.

Anubhav refuses to go which gives Akriti and Sargam some relief while Chanchal is disappointed.

At Gungun's house, Ranvijay arrives to congratulate Gungun and offers to accompany her to the ceremony.

Further, Ranvijay talks about getting married as soon as possible and opening a joint account for the finances.

Gungun agrees to take Ranvijay along with her as she is about to marry him.

On the other hand, the dean insists that Anubhav accompany her to Gungun's award ceremony.

The dean and Anubhav reach the award ceremony and notice Gungun with Ranvijay.