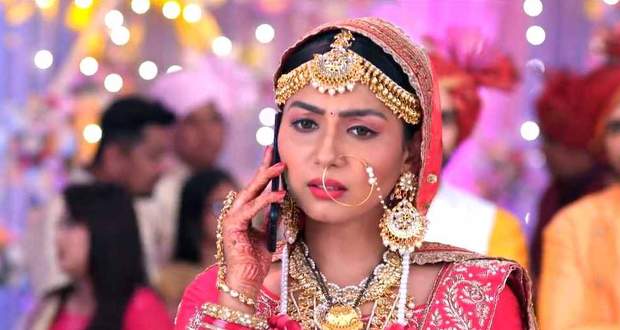 Today's Kabhi Kabhi Ittefaq Sey 26th April 2022 episode starts with Gungun arriving with the vermillion in her head while Garima is worried about her.

Meanwhile, Akriti is tense as Gungun is not ready to tell the name of her husband.

Akriti taunts Gungun about telling the name of her husband she lured to marry her as she is not the "marriage material".

Gungun reveals that she got married because someone decided to be the superhero and tried to be over-smart.

Later, the Kulshresths try to give Gungun advice on telling the truth to her family members even after she has married without her father's consent.

Gungun says it's her personal matter and she will solve it with her dad as he is the only one that stood by her side all this time.

On the other hand, Chanchal tries to talk to Gungun but she ignores him and tries to hold her emotions.

Akriti gets anxious when she repeatedly asks the name of Gungun's husband when she looks at Anubhav's bruises trying to interrogate Anubhav.

Meanwhile, Gungun tries to cover up and say a guy like Anubhav cannot fight as he is someone who is studious and innocent.

On the other hand, Dr. Rhiddhesh suffers an attack and falls to the ground while he thinks of Gungun's trauma.

As Gungun is traveling back home she gets teary-eyed thinking of how Anubhav tried to hide behind her "wife" Akriti and not take a stand for Gungun.

Meanwhile, Anubhav is interrogated by Akriti while he is talking to Golu, Yug, Neeti, and Ankit.

Anubhav says he cannot answer her questions as they are Gungun's personal matters.

Not understanding the value of privacy, Akriti tries to pester Anubhav again and again.

Anubhav partially accepts that he went to meet Gungun on the day of his marriage but cannot reveal her husband's name.

Later, Akriti is scared of losing Anubhav but reminds herself that she is now Anubhav's wife and walks with pride.

© Copyright tellybest.com, 2020, 2021. All Rights Reserved. Unauthorized use and/or duplication of any material from tellybest.com without written permission is strictly prohibited.
Cached Saved on: Sunday 2nd of October 2022 06:49:36 AM