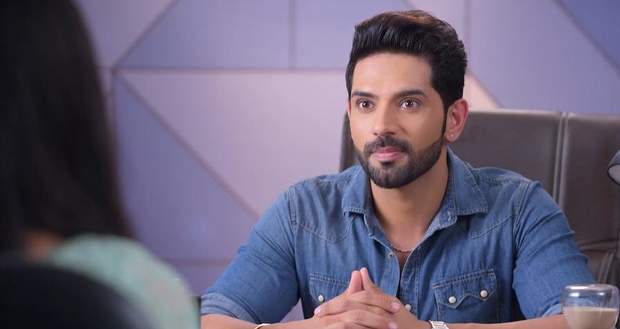 He takes Charudatt’s hands and tells him that he will not let anything bad happen to Goli.

Goli then advises everyone to move on after Anubhav’s death and bids her farewell.

On the other hand, Arman tells Gungun about his dead girlfriend’s love for fishers.

He even says Agrima is his mom’s name so that’s why he wants to publish the next story about fishers.

Instead of listening properly, Gungun starts hallucinating Anubhav sitting next to her who asks her if she wants to forget him that easily.

Seeing Gungun smiling without any reason, Arman also smiles to himself.

Seeing this, an aunty suggests Bina’s mom to arrange the marriage between him and Bina.

Even Bina starts blushing and asks Madhav if he likes to stay with them.

When Madhav nods, Bina urges him to promise her that he will always live with them.

Before promising, Madhav also takes a promise from them that they will not throw him out which makes everyone laugh out loud.

At the same time, Gungun and Arman arrive in the ally and start giving everyone chocolates and cupcakes.

One of Bina’s friends goes to inform her about it.

While Gungun and Arman are distributing sweets, Arman suddenly remembers his meeting with the Japanese.

Before Bina and Madhav can join the others in the distribution, Gungun and Arman get into their car to return and Arman starts his car.

Late in Kulshresthas’s home, Akriti announces that she will live with her father from now on as she does not want to stay as Anubhav’s widow.

Seeing this side of Akriti everyone is shocked.

Golu tries to change her mind by advising her to start working again but she ignores his words and walks away.

After Akriti leaves, Sunanda falls to the ground and starts crying.