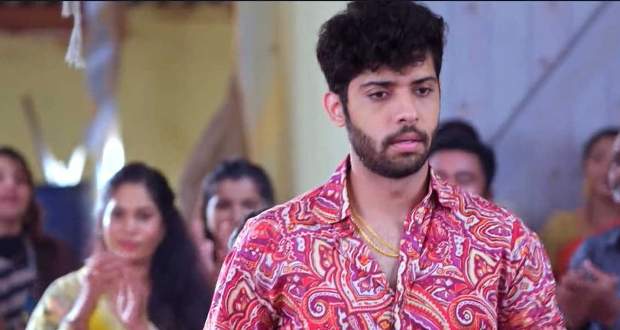 Both Gungun and Garima ask him what's the occasion and Armaan informs them about the success of their Agrima magazine.

Garima suggests Armaan and Gungun cut the cake together but she refuses as she recalls cutting the cake with Anubhav.

However, Armaan convinces her by saying that he also won't celebrate if she doesn't cut the cake with him.

The next day, Gungun is talking to some girls from the Chawl and asks them about any inspiring lady they know of whom she can write a story about and learns about Radha and her daughter Bina.

Gungun goes to Radha's house with Sheetal and reveals that she wants to interview them as Bina is the first girl to graduate from the Chawl while having a single parent.

However, Radha reveals that Bina will be home late and Gungun gives her the magazine with her story in it telling them that she will come the next day for the interview.

Later, Gungun informs Armaan about Radha and Bina's story while he tells her that he's proud of her progress.

Back in Chawl, Bina gets scared to give the interview while Madhav sees Gungun's picture and gets flashbacks which make him have a headache.

Radha goes to Mukhiya and reveals to him that she wants to get Bina married to Madhav.

However, Mukhiya informs her that she has made a good decision since the whole Chawl is talking ill about Bina and Madhav's relationship.

Radha gets worried while Mukhiya orders her that they will get Radha and Madhav married at the Pooja the next day without their acknowledgment.

Elsewhere, Armaan asks Gungun out on a dinner date but backtracks it by saying that the owner wants her to come for the ribbon-cutting ceremony as she is also a celebrity now.

Meanwhile, at the Kulshreshth house, Goli and Pradyush visit for the first time and the family welcome them with a smile on their face.

However, Goli notices Sargam missing and goes to her room to notice Sargam holding Anubhav's picture and crying her sorrows.

Goli apologizes to Sargam for leaving the family in times of need but Sargam tells her that Anubhav would have been happy to see Goli married.