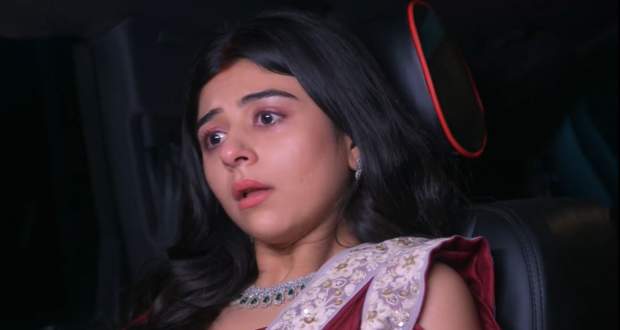 Gungun is in utter shock after she finds out that Rhiddhesh had a heart attack while she was gone.

Gungun cries in the corner while she feels helpless.

Meanwhile, Anubhav arrives but Gungun blasts at Anubhav asking him to leave.

Anubhav says he will not leave and knows his priorities and he has not arrived here just for Rhiddhesh.

Later, Gungun shares about the heart attack with Anubhav and says she cannot lose her father or she will die.

Anubhav immediately stops Gungun to think of something like this and says he will be there for Gungun no matter what.

Anubhav says she need not worry and shows Gungun the ring he wore as Gungun holds a special place in his heart.

Meanwhile, Gungun says she gifted him the ring just as a formality and nothing else.

Later, the conversation is blocked when the nurse arrives and Gungun starts to question her about Rhiddhesh's health update.

Meanwhile, Gungun feels helpless and sits on the floor while Anubhav joins her and consoles her by saying to stay hopeful.

On the other hand, Akriti receives a Muh Dikhai gift from the family and she is told to open it with Anubhav.

Meanwhile, Anubhav is nowhere to be found as he is in the hospital.

On the other hand at the hospital, Doctor says that Rhiddhesh's condition is critical.

Later, Dr. Shyam sees the vermillion on Gungun's forehead and asks Anubhav and Gungun if they got married.

Shyam asks Anubhav to sign the consent form as he is now Rhiddhesh's son-in-law.

Meanwhile, Gungun stops Anubhav to sign as he is not a family member but Anubhav says her sindoor tells a different story.

On the other hand, Akriti starts to cry and says Anubhav went to Gungun's marriage leaving his own wedding and it has a connection with Gungun's vermillion.

Meanwhile, Chanchal and Goli say they have faith in Anubhav and he will not lie to them without any reason.