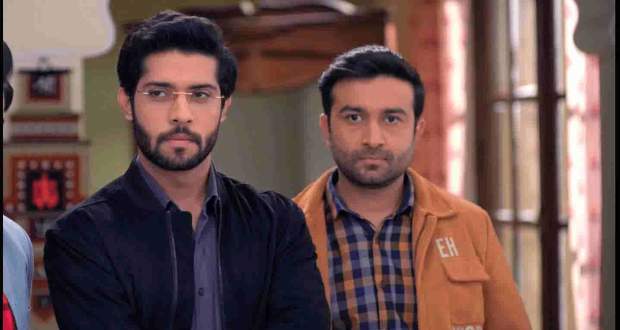 Today's Kabhi Kabhi Ittefaq Sey 28th February 2022 episode starts with Keshav and Soham seizing the opportunity to steal money from the bank after Chanchal(Golu) forgets the keys in the locker.

Both Keshav and Soham frame Chanchal for stealing money from the bank.

Meanwhile, Gungun spends some time with her father, Dr. Riddhesh while she watches TV.

As Dr. Riddhesh reaches to change the channel she says he is boring and should watch something interesting instead.

He asks Gungun about her day to which Gungun replies she had samosas at Anubhav's place.

At the same time, she tells the family about the unknown text message that Anubhav received from her cellphone.

On telling the family that Anubhav came to visit her from work they seemed happy and noticed their love connection.

Later at Golu's office, Mr. Sharma asks him to get the cash ready but Golu is unable to find it anywhere.

Both Golu and his colleague rush to inform the manager but Keshav interrupts asking which story he will now recite in front of his boss.

Meanwhile, at Anubhav's Lab members congratulate him after discovering that he is getting married.

They call him the 'Dark Horse' and tease him.

On being asked about the lucky girl, and how she looks, Aakriti interrupts and says she looks like a rich father's daughter.

Akriti sarcastically comments on how Gungun is special for Anubhav out of jealousy.

The sarcastic comments surpass the limits when Akriti attempts to humiliate Gungun for failing her semester.

Later on, Akriti accuses Anubhav for prioritising Gungun over his work.

Anubhav replies to her sarcasm and says if she finds it difficult to work with him she can consult some other senior.

He also suggests Akriti stay within her limits and focus on her work instead.

Meanwhile, Chanchal is questioned for the missing money while Mr. Sharma thinks Keshav and Soham are at fault.

On reaching his place Chanchal tells the family about his mistake and gets scared of getting arrested.

The family is worried after discovering the amount of money stolen.