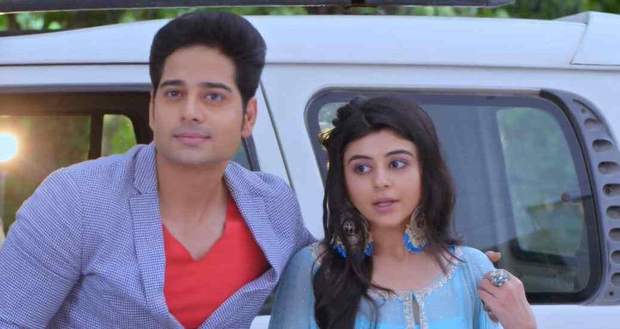 Today's Kabhi Kabhi Ittefaq Sey 28th June 2022 episode starts with Gugun confessing about lying to the media to save Anubhav as no one was taking her seriously.

Further Gungun demands that Akriti should be awarded as well as she had faced a lot of hardships to find Anubhav.

Chanchal, Yug, and Ankit are shocked to see Gungun behaving differently and think about what might have happened.

Akriti gets awarded and Charudatt silently thanks Gungun as she agreed to his request of giving back Anubhav to Akriti.

Further, Anubhav is invited to say a few words on the stage and thank to the army as well as the police officers who saved his life.

Anubhav thanks Gungun for saving his life without worrying about her life and will never forget her sacrifice.

Gungun hides her tears but feels guilty for behaving differently from Anubhav.

Further, Ranvijay's parents arrive at the Bhatnagar house to ask for Gungun's hand in marriage.

Garima says that she knows why they have arrived and will not transfer any amount of money but Ranvijay gets defensive.

On the other hand, Ranvijay's mother tries to put allegations about Gungun's character and suggests Garima should be grateful that they have agreed to accept Gungun after the Anubhav scandal.

Gungun shuts Ranvijay's parents and says she doesn't care about the money and only wants to get married as soon as possible.

Garima requests Gungun to marry someone else instead of Ranvijay but Gungun says she wants Anubhav to hate her as it will be easy for him to move on.

On the other hand, Akriti throws away the award she received and says Gungun did that intentionally to get famous.

Chandragupt says that she should respect the medal and feel grateful for what happened as Gungun did the things in their favor.

Further, Anubhav stops Akriti to talk about Gungun and leaves for work but Chanchal stops him and suggests Anubhav should talk to Gungun and stop her from marrying Ranvijay.

Anubhav says that Gungun did everything to gain popularity and stops them to discuss anything related to Gungun.

Further, Gungun invites her brother to Mumbai for her marriage which shocks him as he expected Gungun to marry Anubhav and not someone else.

Gungun's brother cuts the call while Gungun cries as she loses another person who was close to her.

Later the Dean suggests that Anubhav focus on his career instead of Gungun and move on as soon as possible.

© Copyright tellybest.com, 2022, 2023. All Rights Reserved. Unauthorized use and/or duplication of any material from tellybest.com without written permission is strictly prohibited.
Cached Saved on: Thursday 26th of January 2023 10:13:04 AMCached Disp on: Thursday 9th of February 2023 08:14:20 AM