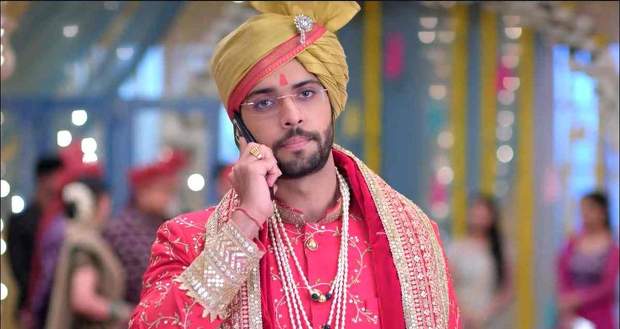 Today's Kabhi Kabhi Ittefaq Sey 29th April 2022 episode starts with Gungun requesting the management to give the best treatment to Rhiddhesh and not worry about the expenses.

In order to soothe Gungun, Anubhav holds Gungun's hand and tries to be there for her in the tough situation.

Meanwhile, Anubhav receives a call from Akriti where she asks him about the reason for his sudden disappearance.

Later, Anubhav informs Akriti that he is in the hospital as Dr. Rhiddesh is suffering from a major heart attack.

On hearing this Akriti gets furious and blames Gungun for calling her husband late at night and asking for help from Anubhav.

Meanwhile, Anubhav scolds Akriti and says instead of thinking that Gungun is his ex-fiance and not helping her on this basis is a selfish act.

Anubhav says instead of lecturing him Akriti should feel guilty about marrying her cousin's ex-fiance without giving it a second thought and hurting so many people to fulfill her wish.

Akriti cuts the call as she feels defeated while she fake cries to grab the attention of the Kulshresth family.

Further, Akriti tries to gain good points and says she wants to go to the hospital and see her 'mamaji'.

Later, Akriti blames Gungun and calls her careless for leaving Rhiddhesh with her.

Meanwhile, Gungun suggests Anubhav should leave as his family members will blame her instead.

On the other hand, Garima arrives and asks Gungun about Rhiddhesh but Gungun says why she came here and should be attending to the guests instead.

Garima cries uncontrollably and prays to God for Rhiddhesh's speedy recovery while Gungun hugs her bua.

Later, Akriti and Chanchal arrive with Ankit and Yug and ask about Rhiddhesh's health.

Akriti questions Anubhav about Gungun's husband while she gets jealous as Chanchal and Ankit express their care and sympathy toward Gungun.

Later, Akriti tries to dig into the matter and asks about her husband and taunts Gungun about marrying an irresponsible guy like Ranvijay.

Meanwhile, Gungun says Akriti should go back and take her husband along with her and tells her marriage is a personal matter.

On the other hand, Garima feels guilty for not being there for her brother and oaths to get flowers from a temple that are believed to have healing properties.

Anubhav offers to visit that temple, while Garima denies it as Anubhav already has helped them a lot.

Later, Gungun says that she will visit the temple for her father.

Akriti is sent back to where she came from

On the other hand, Chanchal receives a call from Charudatt while he informs him to send Anubhav and Akriti back home.

As Anubhav refuses to go back home, Akriti tries to convince Anubhav.

Later, Gungun suggests everyone can leave as she is fine now while Akriti asks Garima to leave and help Shankar instead.

Garima turns cold-hearted toward Akriti and says she has fulfilled all her responsibilities of being a mother and now it's time to be there for her brother Rhiddhesh.

Meanwhile, Akriti feels overthrown and controls her anger as she wants to have a good impression in front of Anubhav.

© Copyright tellybest.com, 2020, 2021. All Rights Reserved. Unauthorized use and/or duplication of any material from tellybest.com without written permission is strictly prohibited.
Cached Saved on: Monday 3rd of October 2022 03:00:52 AMCached Disp on: Wednesday 5th of October 2022 05:32:44 PM