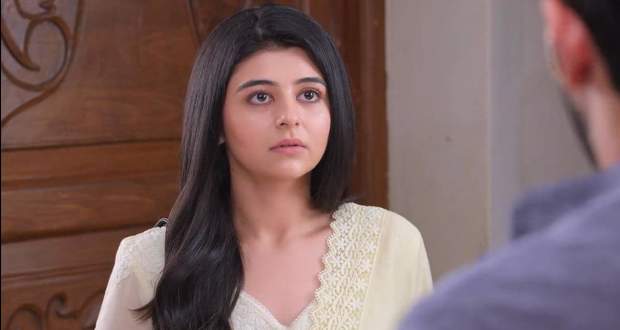 Today's Kabhi Kabhi Ittefaq Sey 29th July 2022 episode starts with Madhav telling Bina and Radha that he doesn’t like to be alone as the two return home.

Radha states that Madhav forgets the way back home whenever he leaves the house alone.

Bina asks Madhav if he likes her and always wants to be with her, to which Madhav replies positively.

Consequently, Radha proposes the idea of Madhav marrying Bina and informs him about the arrangements that are being done in the temple for the wedding the next day.

As the words register in Madhav’s mind, the flashbacks of his marriage with Akriti, him filling up vermillion in the partition on Gungun’s head start occurring again and his head starts spinning.

Meanwhile, at Kulshreshth's house, Sargam suggests to Golu that they should invite Garima and Gungun to the puja.

Surprisingly, Golu, who always used to side with Gungun, refuses and tells her to not much worry about Gungun as she has moved on in her life happily.

Golu is very upset with Gungun and requests Chandragupt to not tell anything to Charudatt as he doesn’t want Charudatt to hate Gungun.

On the other hand, Sunanda discusses the increasing expenses of the house are becoming difficult to handle as Anubhav’s salary used to cover most of the expenses.

Charudatt declines to break the fixed deposit of the prize money Anubhav won when Sunanda asks him to use it to pay the fees of Khushi.

At the same time, Niti enters the room to inform Charudatt and Sunanda about Akriti’s arrival.

Sargam welcomes Akriti with the ‘Arti thali’ in her hands, however, Akriti stuns everyone by throwing the thali irritatedly.

Charudatt realizes his mistake of siding with Akriti when she asks for her share in the property.

Akriti even threatens to bring the police next time if Kulshreshth doesn’t give her the money.

Charudatt and the family is shocked to see Akriti’s true colors and repent to have been siding with her.

On the other hand, Bina shares her feelings for Madhav with Gungun as she shows Gungun the way to her home.

Radha gets worried when Bina doesn’t find Madhav at home and goes to look out for him.

Gungun suggests taking Madhav to the doctor and leaves from there without having the interview.

Further, Armaan drives Gungun back home. Gungun tells him that she has learned so much from the people like Bina and saw life closely.

Gungun also tells Armaan that she has stopped partying as Anubhav used to not like parties.