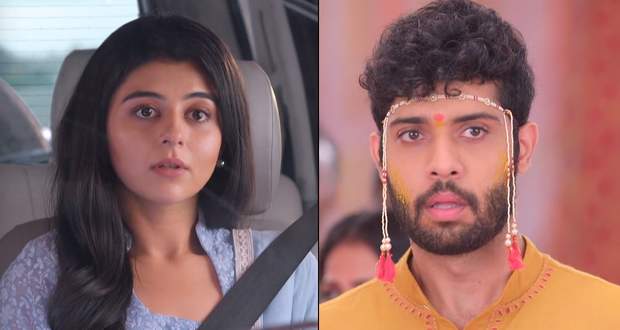 Today's Kabhi Kabhi Ittefaq Sey 2nd August 2022 episode starts with Binna questioning Radha about the importance of marriage and requesting her mother to keep Binaa with her and treat her as a son.

Armaan claps and supports the change and praises Binaa's will to fight for the right things in society despite breaking her own heart.

At the same time, Gungun shows everyone the front cover of their magazine with Binna and Radha.

Radha apologizes to Gungun but Gungun thanks her for taking care of Anubhav all this time.

Radha expresses that she and Binna will miss Madhav.

At the same time, Armaan announces giving away the profits earned by the magazine's issue of Binna for girl child education.

However, Radha says if her daughter cannot get married her son aka Madhav will get married to Gungun again.

Gungun worries about Binaa but Mukhiya Ji excitedly tells everyone he has promised before to find an ideal partner for Binna if Madhav is found married.

Anubhav and Gungun recall all the precious moments while Armaan clears his throat to grab their attention.

Armaan gives the gift which he bought for Madhav and Binna to Gungun and Anubhav while Anubhav expresses his gratitude to Armaan to help Gungun to find him while Armaan tells them he is just a medium.

Later on, in Binna's room, Anubhav apologizes to Binna again for his actions but Binna tells him Radha and Binna are happy with him being happy and Binna gives Anubhav a photo frame with a formation of sea shells.

Meanwhile, in Kulshreshtha's House, Aakriti calls Charudatt and tells Charudatt about her plans of wanting a piece of land instead of money due to inflation in land's prices because of the construction of a flyover.

Hearing this, Charudatt gets angry and confronts Akriti about renting their piece of home to a stranger.

At the same time, Armaan calls Golu to tell them about Anubhav being alive but Golu misunderstands and thinks he's calling him to tell about his and Gungun's relationship.

Armaan tells him to put the call on speaker and tells everyone to reach the venue in one hour as Anubhav is alive.

However, Akriti also hears the conversation and gets shocked.

On the other hand, Binna helps Gungun to get ready.

Later, Gungun assures Anubhav about his family being alright and tells him about her plans to take him to the hospital first thing.

Meanwhile, Anubhav recalls Charudatt's words against Gungun so Anubhav tells Gungun about his wish to live in Mumbai with her as his family has already suffered his death's pain.

© Copyright tellybest.com, 2022, 2023. All Rights Reserved. Unauthorized use and/or duplication of any material from tellybest.com without written permission is strictly prohibited.
Cached Saved on: Monday 21st of November 2022 08:34:06 AMCached Disp on: Thursday 1st of December 2022 09:59:18 PM