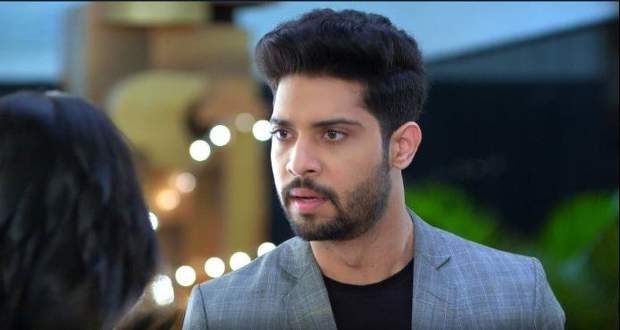 Today's Kabhi Kabhi Ittefaq Sey 2nd June 2022 episode starts with Akriti threatening Anubhav saying that he must choose between her and Gungun and if he chooses Gungun, she will ruin them.

Anubhav tries to argue with her while Akriti tells him that he has the choice to open her or Gungun's door and she goes to her room.

Both Gungun and Anubhav slide to the floor in agony.

Anubhav goes to Akriti's room and slides down the door recalling his memories with Gungun.

Akriti mocks him for crying and further tells him that from now on she will control everything.

Anubhav talks back to Akriti while she says that she will not divorce him and will let him get together with Gungun.

Akriti retorts that she would rather be upset in their marriage than let him be with Gungun and threatens him that she will make gossip out of Gungun in the whole Lucknow.

Feeling scared for Gungun's reputation, Anubhav requests her to not do it while Akriti menacingly looks at him and tells him that from now on she will monitor his every single movement.

Meanwhile, Gungun writes a heartfelt letter addressed to Anubhav bidding him goodbye and telling him to live a happy life with Akriti.

At the same time, Neeti and Khushi argue with Chanchal, Yug, and Ankit for supporting Anubhav's relationship with Gungun.

They try to reason that it is Anubhav's decision on whom he wants to be with but Neeti and Khushi don't pay any heed to them.

At night, Anubhav sees that Akriti's asleep and decides to go meet Gungun.

Elsewhere, Ranvijay and his friends enter the hotel as he orders them to find Gungun's hotel room.

Anubhav knocks on Gungun's door but she intentionally tells him to leave her life and that loving him was a mistake to hurt his feelings.

Gungun silently cries as Anubhav goes back to his room while Ranvijay sees everything and feels satisfied to see them arguing.

Later, Anubhav leaves the hotel in a car while Ranvijay and his friends follow him.

© Copyright tellybest.com, 2020, 2021. All Rights Reserved. Unauthorized use and/or duplication of any material from tellybest.com without written permission is strictly prohibited.
Cached Saved on: Tuesday 2nd of August 2022 01:27:40 AMCached Disp on: Sunday 14th of August 2022 11:10:49 AM