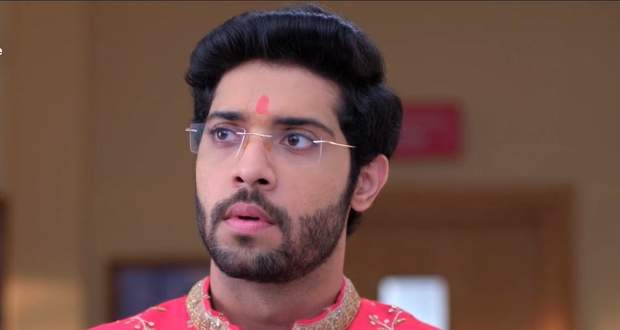 Gungun feels saddened by Akriti's words and tells her that she has lost the right to call Riddhesh her uncle by degrading the value of his life.

Angered by Gungun, Akriti leaves expecting her family to come after her but gets shocked when everyone stays rooted in their place.

Gungun tells Garima to not strain her relationship with Akriti and return home to fulfil the post-marriage ceremonies.

Garima leaves while Gungun says that she is going to the Shiv temple to get the holy flower.

Anubhav states that he is coming with her as she is his responsibility.

While Garima is on her way, her husband Shankar scolds her for not being present at the post-marriage ceremonies.

However, having enough of his taunts, Garima calls him and Akriti out revealing that she knows about his affair.

At Anubhav's house, Akriti arrives alone and Bua starts taunting her for leaving Anubhav with Gungun on the first day of their marriage.

Feeling insulted and embarrassed by the taunts, Akriti runs to her room.

At the temple, the pooja is completed as Anubhav and Gungun thank the priest for doing the pooja at an ungodly hour.

Gungun timidly asks Anubhav if Riddhesh will be fine as he assures her.

At Anubhav's house, the family tries to comfort Akriti by telling her to open the Muhdikhai gift.

Still crying, Akriti states that the ceremony will be incomplete without Anubhav.

In the early morning, Anubhav and Gungun reach the hospital where she tells him to return home.

He tells her that he'll leave after seeing Riddhesh but Gungun convinces him that she'll inform him if she's having trouble.

Gungun enters the hospital with a smile thinking that Riddhesh must have woken up and called for her.

However, the doctors inform her that they weren't able to save Riddhesh as she looks on.

Gungun slides down by the door crying in helplessness and rebukes Riddhesh for leaving her alone.

Not being able to think clearly, Gungun starts banging her head on the door saying that she'll kill herself while others try to stop her.