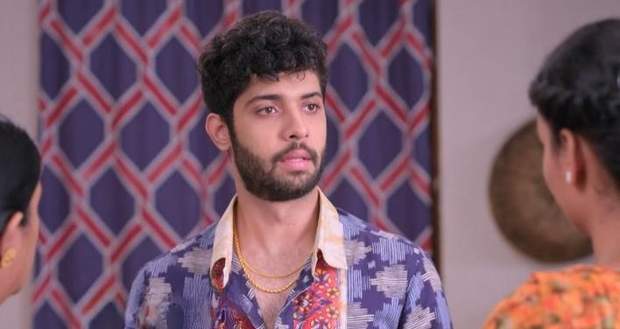 To this, Gungun replies that Anubhav’s place is irreplaceable in her life.

Hearing this, Arman changes the topic by announcing that they need to buy gifts for Bina.

At the same time, Golu arrives home and informs them that they need to wait for another week or two to withdraw money from Anubhav’s account.

While they are busy talking, Akriti arrives there and announces that she wants the money today.

Hearing this, Chandru tries to change Akriti’s mind with soft words but Charudatt stops him.

As per him, Akriti does not deserve his soft words.

Instead of listening, Akriti threatens to involve lawyers if they don’t give her shares in the property today.

Sargam tries to pursue Akriti to give them some time as they have fought Anubhav for her.

Even Golu asks Akriti how she can be so cruel.

Unbothered by all this, Akriti orders Sargam to give her Anubhav’s prize money as compensation for Anubhav’s behavior towards her.

Sargam along with other family members refuses to give her the money but she threatens to report Sargam.

Thinking about family reputation, Sargam agrees to sign the papers but Golu snatches it from her and tears it in half.

Seeing this, Akriti smugly informs them to wait for their ruin and walks away.

Elsewhere in fisher’s ally, everyone puts haldi on Bina and Madhav as part of the marriage ritual.

After the Haldi ceremony, everyone including Bina and Madhav starts dancing.

Later while choosing couple rings for Bina and Madhav, Gungun starts recalling her memory of gifting Anubhav the same ring.

Arman puts the ring on Gungun’s finger much to her shock.

However, he quickly clarifies that he was just checking the ring size nothing else.

After choosing the rings, Arman informs Gungun that he will tell her something tomorrow.

Gungun urges him to tell her now but he advises her to guess.

Gungun then thanks Arman for being her friend but he asks her if he wants to become something more.

Before Arman can say anything, the shop owner returns with rings.

Meanwhile, in Fisher’s ally, Bina urges Madhav to sing a song for her.

While singing, Madhav feels as if he has sung the song for someone else.

However, Bina urges Madhav to continue and not think too much.