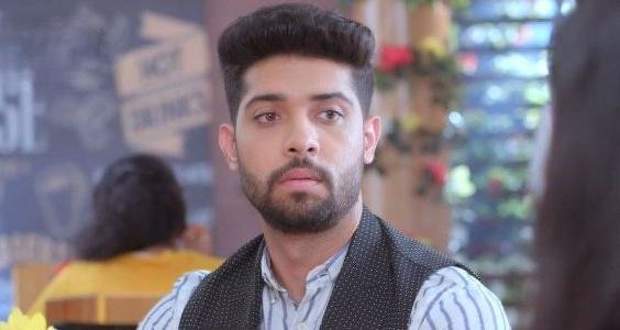 Gungun thinks of the promise she made to Charudatt and is stunned to see Akriti.

Further, Akriti screams at Anubhav by calling him a fraud, selfish, and spineless person.

Akriti calls Gungun selfish and shameless while she tries to slap her.

Anubhav holds Gungun's hand and says Gungun is not at fault as he is the one who invited Gungun to meet him.

Further, Akriti leaves the cafe and warns Anubhav by saying that she is going to clear things out.

Gungun thanks Anubhav but asks Anubhav to never see her again.

Anubhav tries to ask Gungun to whom she promised to never meet Anubhav again but Gungun walks away.

On the other hand, Akriti complains about Anubhav meeting Gungun again and mourns in front of Charudatt.

Charudatt blasts Chanchal by saying that he is promoting Anubhav's infidelity and is wrong in supporting Anubhav.

Anubhav arrives and is confronted by Charudatt while he shouts at the top of his lungs in anger.

Akriti says that she wants a divorce which shocks Sargam, Goli, and Charudatt.

Further, Akriti says that she cannot wait forever to fix her marriage and that divorce is her final decision.

Anubhav tries to explain that he went to meet Gungun for some other reason but Akriti continues to tattle and says she knows they went to celebrate their award ceremony together.

On the other hand, Gungun knocks at Ranvijay's house and confronts him for kidnapping Anubhav and informing the terrorists about Anubhav.

Gungun says the wedding is over and she will not marry a criminal like Ranvijay.

Ranvijay's father tries to calm Gungun's anger and says he wants to discuss investments but Gungun says she knows his company is at loss and will never invest with him.

Gungun cancels the investment and marriage and slaps Ranvijay tightly and shows him his place.

On the other hand, Charudatt and his family ask Anubhav to apologize to Akriti but Anubhav refuses as it is not his fault.

Akriti and Ranvijay burn in the rage of revenge while Akriti calls Ranvijay.

Akriti says that she wants to take revenge while Ranvijay smirks and agrees to her offer.