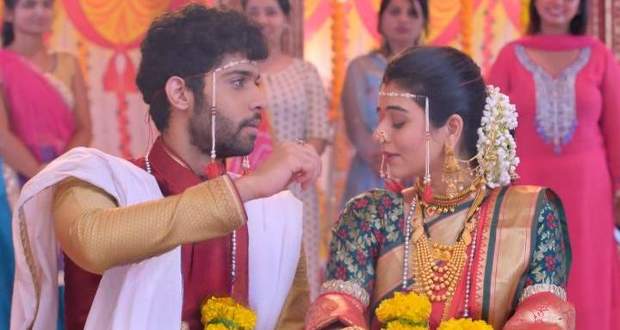 Today's Kabhi Kabhi Ittefaq Sey 3rd August 2022 episode starts with Anubhav telling Gungun he does not want to go back to Kulshreshtha house while reasoning he has got this reincarnation for her only.

Anubhav expresses his concern about his family again separating them.

However, Gungun reasons she cannot keep his family's happiness because of her selfish reasons.

Anubhav praises her for her being so selfless.

Meanwhile, Pandit Ji calls Gungun to mandap until then Radha takes Anubhav to the temple.

Meanwhile, Armaan comes to Mandap to help in preparation while a girl gives Armaan Anubhav's 'saafa'.

At the same time, the Kulshreshtha family reaches and misunderstands the situation seeing Armaan and Gungun in the same mandap.

Kulshreshtha starts accusing Gungun of getting married only one month after Anubhav's death.

However, Armaan defends Gungun by revealing the truth of Anubhav's death to the Kulshreshtha family.

Hearing Akriti's name Charudatt gets agitated and says she's a selfish girl who is a home destroyer.

However, Armaan confronts Charudatt about how they believed Akriti's word against the truth.

Later on, Kulshreshtha's family accuses Gungun of lying about Anubhav reincarnation to call them for her marriage.

At the same time, Anubhav calls them, and seeing Anubhav alive the family breaks into tears and hugs Anubhav affectionately.

However, Armaan clarifies that the dead body which they found was not Anubhav's instead he was thrown into the sea while the fisher's found him on the shore.

Hearing the truth, Charudatt apologizes to Gungun by joining his hands.

Armaan confronts them saying Gungun could have lived in Mumbai with Anubhav without them knowing anything but Gungun didn't do that.

Charudatt proposes to correct their mistake by Gungun being the only suhaagan of Anubhav.

Golu and the kulshreshtha family apologize for their previous actions.

Gungun supports the Kulshreshtha family by saying she will give Akriti all the money she wants but not going to let the property get divided.

Gungun introduces Radha while Sargam shows her gratitude for taking care of Anubhav.

Meanwhile, Chandragupt apologizes for misunderstanding Armaan while thanking him for revealing the truth.

Charudatt exclaims to stop all the melodrama and to get happy as Gungun and Anubhav are getting remarried.

But at the same time, Akriti comes and exclaims this marriage cannot happen as Anubhav is already married to her.

© Copyright tellybest.com, 2020, 2021. All Rights Reserved. Unauthorized use and/or duplication of any material from tellybest.com without written permission is strictly prohibited.
Cached Saved on: Saturday 1st of October 2022 10:31:55 PM