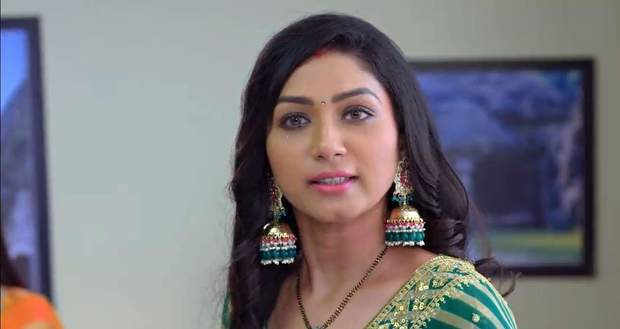 Anubhav is lost thinking about Gungun's promise to never meet Anubhav and asking him to leave her alone forever.

Meanwhile, a goon sent by Ranvijay asks about the way to the airport from Anubhav and makes him sit in his car.

Further, Ranvijay shifts Anubhav to a terrorist group as they were looking for a scientist.

The terrorist group asks Anubhav to help them to make a weapon.

Disagreeing with the demands of terrorists, Anubhav says he is a true countryman and cannot do anything against his country.

The terrorists push Anubhav and he gets unconscious and later decides to torture him to get things done their way.

Later, Gungun's vermillion falls on the ground which makes her anxious and she decides to call on Anubhav's cell phone.

On the other hand, Ranvijay throws away Anubhav's sim card as he had his phone after kidnapping him.

The next morning, Akriti and Chanchal look out for Anubhav while Akriti blasts on Gungun while she fails to find him.

Further, Akriti and others arrive back at the Kulshresth house while they get worried about Anubhav not arriving home yet.

Later, Charudatt gets an idea about something odd that happened in Mumbai by Akriti's face and asks her about it.

Akriti explains how Anubhav and Gungun were together at the seminar and Anubhav is the one who filled vermillion on her forehead.

Meanwhile, Charudatt burns with anger and decides to give his final verdict on the hideous act by Anubhav.

Further, Chanchal tries to explain Anubhav's point of view and gives him a chance to explain himself while Charudatt denies listening to anything.

In support of Anubhav, Yug says it is because of Akriti's pressure that Anubhav decided to go somewhere else rather than come back home.

Chanchal stays firm as well and tries to explain Anubhav's point of view to Akriti but Akriti continues to argue.

"If Anubhav has not arrived back home it is Akriti's fault," says Chanchal.

Akriti blames Gungun for all this and she might have hidden Anubhav somewhere in Mumbai.

Charudatt says instead of blaming others we should focus on finding Anubhav.

© Copyright tellybest.com, 2020, 2021. All Rights Reserved. Unauthorized use and/or duplication of any material from tellybest.com without written permission is strictly prohibited.
Cached Saved on: Wednesday 3rd of August 2022 07:11:51 PMCached Disp on: Tuesday 16th of August 2022 04:28:23 AM