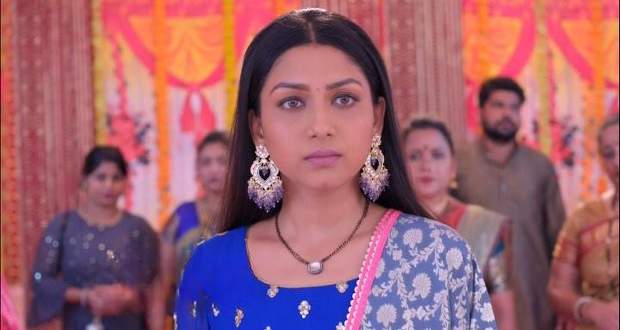 Akriti puts on an act and expresses her concern for the Kulshreshtha family and Gungun taking advantage of Anubhav's lost memories.

However, Akriti blames Gungun for Anubhav's death while Anubhav recalls the events of Akriti beating Gungun with glass.

Akriti recalls Gungun's mother organizing a pre-wedding party and exclaims how they insulted the Kulshreshtha family.

Angry Gungun confronts Akriti who was the mastermind behind all the events with Gungun's mother Maya.

Gungun reads Maya's text aloud and reveals the truth of Akriti loving Anubhav and how she planned all the incidents in the institute.

However, Gungun exclaims that Akriti did this for marrying Anubhav as Gungun's mother wanted to take Gungun to London.

Later on, Akriti screams at Gungun for spouting lies but Anubhav accuses Akriti of all the events.

Afterward, Anubhav confesses her love to Gungun and confesses his hate towards Akriti.

Anubhav blames Akriti for manipulating the Kulshreshtha family against Gungun.

Meanwhile, Akriti calls Gungun the other woman but Anubhav tells Gungun was the one who got married to him first.

Meanwhile, Anubhav confronts Akriti for not saving her from terrorists despite Anubhav informing her himself while Gungun was finding him in every corner of a strange city.

Akriti tells Anubhav to be ready to pay for his actions if he's going to marry Gungun.

Meanwhile, Charudatt reveals the truth to Anubhav of Akriti blackmailing Sargam of torturing her and demanding a piece of Kulshreshtha's house.

Anubhav exclaims to Akriti to take whatever money she wants and go.

Armaan confronts Akriti for being a fool and tells her about the amount of alimony can only be decided by the court.

However, Armaan threatens Akriti to reveal her true face on his channel if she decides to put any false claims about the Kulshreshtha family.

Hearing Armaan's words Akriti changes her colors and apologies to everyone and requests them to give her a chance as she only wants Anubhav's love and Kulshreshtha's family's blessings.

Charudatt compares Akriti to a chameleon while Anubhav tells Akriti divorce paper will reach her home.

Later on, Akriti blames Gungun and regrets her actions as to why she didn't get Gungun killed when Ranvijay suggested that.

Binna and the slum people threaten Akriti while afraid of the crowd Akriti runs away cursing Gungun.

Charudatt apologizes to Mukhiya Ji for all the commotion.

Hearing Charudatt saying no one is from Gungun's side, Radha exclaims that all the basti people are on Gungun's side.

© Copyright tellybest.com, 2020, 2021. All Rights Reserved. Unauthorized use and/or duplication of any material from tellybest.com without written permission is strictly prohibited.
Cached Saved on: Sunday 2nd of October 2022 05:03:09 AMCached Disp on: Thursday 6th of October 2022 04:35:19 PM