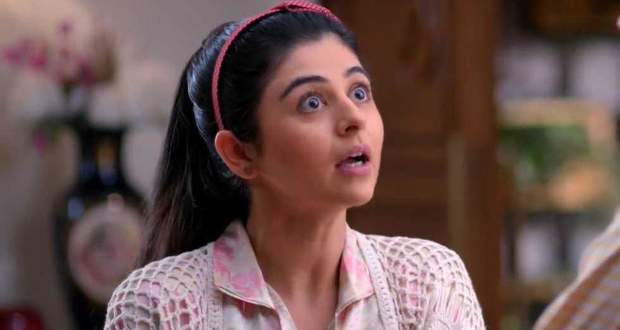 Today's Kabhi Kabhi Ittefaq Sey 4th March 2022 episode starts with Anubhav and Charudatt willing to give away their savings and help Golu.

Frustrated Golu refuses to eat anything while Neeti tells him that his brother Charudatt has also not eaten since morning. Charudatt says as long as the family is together, they can bear all sorrows.

Later, Anubhav and Charudatt leave for the bank while Golu prevents them from going as he is ashamed for humiliating his family.

He says he will go to jail and get hanged to death instead. Charudatt slaps him and says he should never say this again.

Later, Anubhav and Charudatt visit the bank and talk to the bank manager about accepting their savings and closing the case. The manager refuses to accept their money but assures them he is trying his best to save Chanchal.

Meanwhile, Dr. Rhiddesh arrives with Gungun at Anubhav's place and informs the family that he knows Chanchal's truth.

Charudatt replies he must have understood the real reason behind the cancellation of Anubhav and Gungun's marriage.

Dr. Rhiddesh complains that Charudatt does not consider him as a part of this family which made him keep this big problem a secret from him.

Dr. Riddhesh assures the family that they need not worry as no investigation team will arrive at Kulshrestha's House. The family feels at peace and asks about how he managed to save Golu from getting insulted.

Later, Dr. Riddhesh explains that it was all possible due to Gungun's idea as she told the manager about her fixed deposit that is about to mature.

Gungun suggested that he should give her a receipt for receiving her money but keep the money for Chanchal's case instead.

The family members thank Gungun and appreciate her for coming up with a quick plan to save Golu.

At last, Chanchal is informed to arrive at the office as the investigation team has arrived to question Chanchal again at the bank.