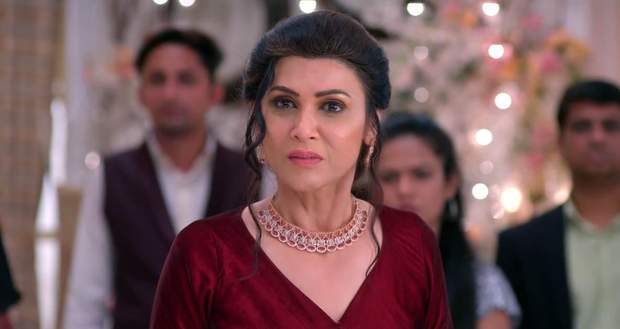 Later, Anubhav also speaks against Gungun's insincere behavior as she failed in B.A. Anubhav says Gungun was against his family from the start and planned to humiliate them through Maya.

Dr. Rhiddesh stops Anubhav but Anubhav blames him as well for Maya's plan. Anubhav says Rhiddhesh should have told them before if he had intentions not to marry her Gungun at their poor house.

After the raging conversation, Anubhav gets unconscious and falls on the floor, the Kulshresthas leave for home.

As soon as the Kulshresthas reach home, Sargam expresses her gratitude towards Akriti and thanks to her for standing by their family's side.

Meanwhile, Anubhav is taken to his room to get some rest.

On the other hand, Gungun is stunned and is thinking about the scandal that happened at the party due to Dr. Maya.

Gungun throws Maya's clothes out of the closet in order to kick her out of the house.

Later, Chandragupt asks Charudatt the reason to stay silent while they were getting humiliated.

Charudatt says his values are greater than their humiliation while Sargam is angry by Gungun's behavior as well.

Meanwhile, Golu says Gungun is innocent and had no idea about Maya's plan while Chandragupt disagrees.

Later Akriti accepts her mistake of giving alcohol to Anubhav without knowing.

After a heavy discussion about Gungun, Charudatt decides not to take her name in the Kulshrestha household from now on.

Meanwhile, Gungun asks Maya to leave and regrets her decision of showing trust in Dr. Maya at first.

Later, Rhiddhesh asks Gungun to have some rest and promises to kick Maya out in the morning itself.

Maya says she is not going anywhere and will be staying at Kamini's house for some time.

On the other hand, Akriti is expressing her care for Anubhav while Sargam and Sunanda shower her with their care.

Golu seems skeptical of Akriti's intentions but is not sure if she has genuinely changed or not.

Meanwhile, Akriti offers to make dinner for the Kulshresthas and heads toward the kitchen.