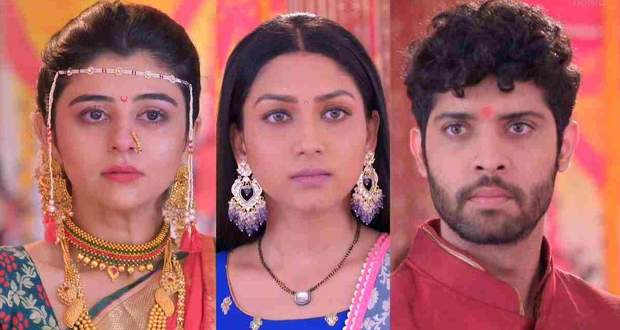 Meanwhile, everyone starts to dance and enjoy the moment.

Later, Anubhav puts mangalsutra in Gungun's neck and fills her hairline with sindoor.

After taking pheras Anubhav and Gungun take blessings of the elders.

Later in Kulshreshtha's house, Sunanda and Charudatt pray to god while thanking him for returning their Anubhav to them.

Meanwhile, Charudatt talks about the Kulshreshtha family not being united despite living under the same roof.

However, Sunanda expresses her wish of visiting Kashi to express her gratitude toward god.

At the same time, the youngsters are sitting in a room while Golu tells how seniors have slept.

Meanwhile, he discusses how Divya and his two sister-in-laws were preparing for Gungun's greh pravesh late in the night while the couple is coming in the morning.

Golu's happiness has no bounds as he has worked hard for the last two years for Gungun's and Anubhav's marriage.

Meanwhile, Neeti blames herself for always taking Akriti's side but Golu pacifies her saying he was on Gungun's side because he has seen their love bloom.

Meanwhile, the Kulshreshtha's stops reminiscing about the past events and starts to plan a surprise for Gungun and Anubhav.

However, Golu reminds them that Gungun and Anubhav may not come tomorrow morning and remain in Mumbai for a month as they are in their honeymoon phase.

Meanwhile in Ranvijay's home, Ranvijay's father is talking rudely to the lawyer as he doesn't believe how Anubhav is alive.

However, the lawyer warns Rajvijay's father if Anubhav gives testimony no one can save Ranvijay.

Later in the police station, Ranvijay's parents come to know while applying for bail that Ranvijay is shifted to another jail.

Shankar calls Garima to ask about this betrayal but furious Garima confronts him for plotting against the Kulshreshtha family.

However, Shankar supports Akriti's actions of asking for her share of the property while Garima threatens Shankar to sue him for mental harassment if Akriti sues Anubhav.

Hearing this Shankar changes colour and tells Akriti to forget Anubhav like a bad dream.

However, Akriti asks Shankar what has he done for Garima to sue him.

Shankar reveals the truth to Akriti of Garima leaving him because of having an extramarital affair.

Hearing the truth, Akriti gets shocked while Shankar advises her to apologise to Anubhav and Garima on behalf of him.

© Copyright tellybest.com, 2022, 2023. All Rights Reserved. Unauthorized use and/or duplication of any material from tellybest.com without written permission is strictly prohibited.
Cached Saved on: Monday 21st of November 2022 06:42:56 AMCached Disp on: Friday 2nd of December 2022 02:20:19 PM