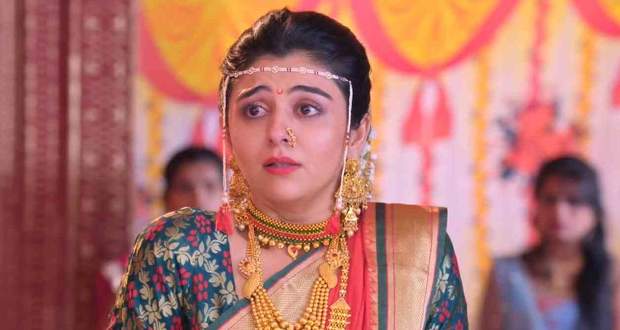 Today's Kabhi Kabhi Ittefaq Sey 6th August 2022 episode starts with Sunanda doing arti of Anubhav and Gungun then Saragm does the same and welcomes Gungun into the house.

However, seeing Gungun's red footprints in Kulshreshtha's house Armaan's heart breaks as he has no chance of getting with Gungun now.

Garima requests Anubhav to take care of Gungun while Anubhav assures her.

At the same time, Kulshreshtha's family retells the struggle of every family member and how they suffered after Anubhav's death.

Later on, Yug asks Gungun why she went to fisher's ally.

However, Gungun gives all the credit to Armaan as he was the one who gave her the job.

Meanwhile, Kulshreshtha's family tries to find Armaan but finds out that he has already gone while Gungun reasons that he must be in a meeting.

Gungun tells Anubhav how Armaan saved her from Ranvijay and his family.

Anubhav feels his heart break after hearing Gungun's struggle after his death.

Afterwards, Gungun thanks Anubhav for coming into her life while Anubhav says he should be the one thanking her.

At the same time, Charudatt apologizes to Gungun for not taking care of her after Anubhav's death and compares her to Laxmi Mata and Durga mata of his house.

Charudatt folds his hand in front of Gungun and asks for Gungun's forgiveness.

Gungun forgives Charudatt and tells him he is her father and he can say anything to her.

On the other hand, Armaan is crying in his office while recalling his and Gungun's first meeting and curses his heart for thinking he had a chance with Gungun.

At the same time, Gungun comes and asks Armaan why he is crying.

Armaan tries to change the topic and asks Gungun if she would continue her job.

Meanwhile, Gungun reconfirms she would never leave the job as she found Anubhav because of this job.

At the same time, Neeti, Divya, Khushi come and ask Gungun anďAnubhav to go downstairs as everyone is calling them.

Just then, Anubhav gets a call from Akriti.

© Copyright tellybest.com, 2022, 2023. All Rights Reserved. Unauthorized use and/or duplication of any material from tellybest.com without written permission is strictly prohibited.
Cached Saved on: Monday 21st of November 2022 08:56:39 AMCached Disp on: Friday 9th of December 2022 06:23:11 PM