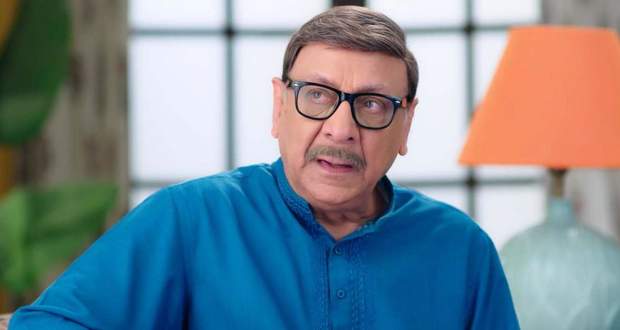 Later Akriti tries to taunt Anubhav after Chanchal informs the family about having a word with the Dean about Anubhav's missing information.

Further, Sunanda and Goli worry about Anubhav and Sunanda talks about how she got a dream where Anubhav was asking for help and might be in a problem.

Akriti taunts by saying that Anubhav is surely prone to be in a problem after adding vermillion on not one but two girls at the same time.

Meanwhile, Gungun talks to the inspector at the police station where he informs Gungun about a terrorist group that kidnaps renowned scientists and engineers to fulfill their anti-national needs.

Later, the inspector suspects that Anubhav might be kidnapped by that terrorist group.

Gungun provides a photograph and phone number of Anubhav to the police.

On the other hand, Akriti continues to defame Gungun and Anubhav's relationship as some Mistress and Husband thing and makes everyone uncomfortable with her words.

Meanwhile, Chanchal and Yug boil in anger at Akriti's plan on using Charudatt by portraying Anubhav in a bad light and showing herself as an ideal wife.

On the other hand, Gungun receives a call from Chanchal while she faces kicks and knocks in the heat of Mumbai.

Further Gungun says that she will only arrive back after finding Anubhav.

Later, Anubhav remains undefeated by denying agreeing with the terms of the terrorists.

On the other hand, Gungun receives a death threat from the terrorists to leave Mumbai.

Meanwhile, Anubhav is shown a fake picture of Gungun's dead body which makes him worried.

Later, the terrorist says that the picture was fake and that Gungun will be saved after Anubhav agrees to their terms.

On the other hand, the inspector arrives at the hotel and interrogates Gungun if she is actually Anubhav's wife or not.

Meanwhile, Charudatt arrives at Anubhav's office and talks to the Dean about calling Anubhav while the Dean makes them realize that she has already tried to reach him out.

Akriti tries to defame Gungun and Anubhav in front of the Dean while Charudatt and Akriti talk that Gungun is trying to mislead them.

Further, the Dean receives a call from Gungun and informs her about Anubhav's kidnapping and the threat letter.

The Dean suggests that Gungun arrive back but Gungun denies as she will only arrive after finding Anubhav.

© Copyright tellybest.com, 2020, 2021. All Rights Reserved. Unauthorized use and/or duplication of any material from tellybest.com without written permission is strictly prohibited.
Cached Saved on: Sunday 2nd of October 2022 06:59:55 AMCached Disp on: Wednesday 5th of October 2022 05:13:05 PM