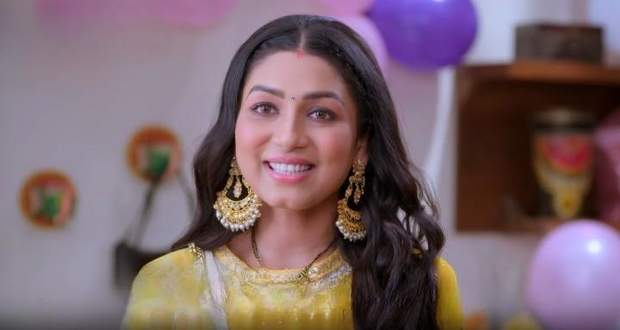 Akriti asks Anubhav to show her the room to confirm if Gungun is there.

Chanchal asks Gungun to hide outside while Akriti blasts on Anubhav and says she will come there if he doesn't confirm about Gungun.

Anubhav cuts the call as Akriti annoyed him and spoiled his birthday.

On the other hand, Gungun feels emotional for being the second woman in Anubhav's life.

Anubhav says that Gungun is his first love and should not be sad.

Gungun says that she cannot come along with him inside after listening to Akriti and Charudatt's comments and will go to her brother's house.

Further, Ranvijay blasts the corrupt police officer for not being able to kill Anubhav.

The police officer explains that they have to be careful as there are CCTV cameras all around.

Anubhav bends on his knee and requests Gungun to join him in the room.

Gungun agrees to join him and Anubhav cuts his birthday cake joined by Chanchal and Ankit.

Akriti whines about Anubhav being with Gungun.

Sargam blames everything on Gungun and Charudatt says that he will go to Mumbai and bring back Anubhav.

Akriti calls her father and tattles about Gungun being with Anubhav.

Shankar suggests Akriti should win Anubhav's heart with love instead of getting angry at him.

The next day, Anubhav wakes up and shouts Gungun's name as he gets scared that Gungun might not be with him.

Gungun hugs Anubhav and calms him down and later takes him with her to a special place.

Pradyush asks for Anubhav and is shocked to see Akriti instead of Gungun.

Further, Pradyush offers to marry Goli which angers Goli and she asks how come he is requesting her to marry him.

Pradyush apologizes to Goli and wishes to fix the mistake he made years ago.

On the other hand, Gungun takes Anubhav to her brother Prakash's house.

Prakash's mother prepares pudding for Anubhav and celebrates his birthday.