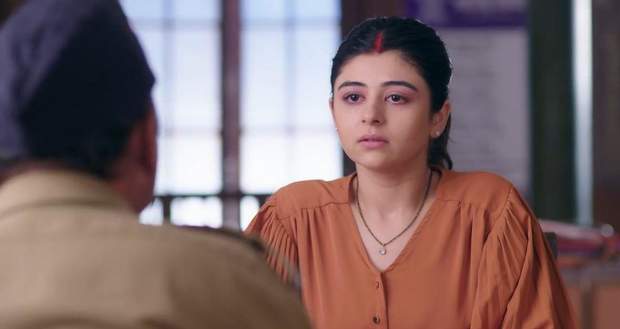 Today's Kabhi Kabhi Ittefaq Sey 7th June 2022 episode starts with Gungun visiting the science institute and asking if they have some information about Anubhav.

Meanwhile, the co-scientists talk about how Anubhav must be hiding somewhere after the humiliation.

Gungun answers them back by saying Anubhav was their guest and is a big personality but they have forgotten about everything and are only focusing on that drama.

Further Gungun leaves the hall and asks for help from the students in the center.

On the other hand, the terrorists threaten Anubhav to kill Gungun as she has not left for Lucknow yet.

Further, Shankar bursts on Garima after finding out about Gungun and Anubhav's relationship.

Akriti tries to blame Garima while Garima says that she doesn't accept Akriti's marriage as Anubhav added vermillion on Gungun before he married Akriti.

Garima says that Akriti can never take place in Anubhav's heart as she is selfish while Gungun will stand by Anubhav no matter what.

On the other hand, Gungun talks to the media and tries to find a link to Anubhav's kidnapping.

Later, Anubhav is shown Gungun's interview to the press where she says that a wife cannot be threatened at any cost.

Further, Anubhav requests the terrorists to call Gungun and tell her to go back.

Anubhav calls Gungun while Gungun is stunned to hear his voice where he says she should go back to Lucknow.

Gungun denies believing Anubhav's statements and asks if he would say these things in front of her face.

Anubhav smiles after disconnecting the call as Gungun who used to live in big mansions is finding him in every corner.

Later, Anubhav denies bowing down in front of the terrorists which makes them angry.

Gungun joins the dots and finds that Anubhav must be in the same city and decides to inform the police.

Meanwhile, an unknown man keeps an eye on Gungun.