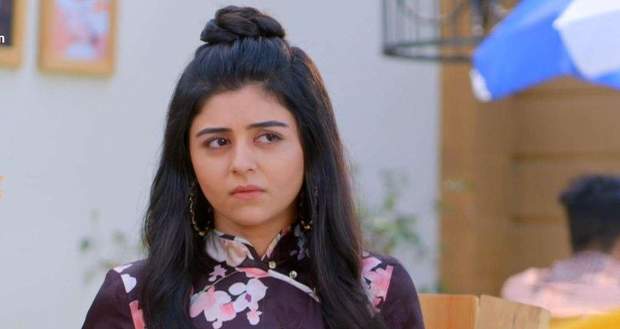 Today's Kabhi Kabhi Ittefaq Sey 9th April 2022 episode starts with Anubhav getting fed up with Gungun's attitude and requests her to never come back into her life again.

Later, Anubhav adds that it was because of Gungun that he ignored someone (Akriti) who deserved his attention rather than Gungun and decides to leave.

Meanwhile, Gungun stops Anubhav by saying she wants to tell him about her marriage with Sarvan which is fixed by Maya, and invites him.

Anubhav looks at her with pity saying she must be in dire need to get married to that NRI clown.

Meanwhile, Anubhav informs her that he will not attend Gungun's marriage because he is getting married the same day as hers.

As Gungun asks the unlucky girl's name Anubhav says she will find it out sooner and till then Gungun should stay away from his family as they don't want to see Gungun's face at any cost.

On hearing this, Gungun is shattered but tries to keep her chin up while Anubhav leaves.

Gungun arrives back home crying while Maya tries to show her care.

Meanwhile, Rhiddhesh calls Maya a snake who destroyed her own daughter's life.

Gungun realizes that Anubhav is getting married the same day as their old wedding day and decides to meet the Kulshresthas.

Rhiddhesh stops Gungun as the Kulshresthas will not listen to any of her requests.

On the other hand, Maya says she will not leave the Bhatnagar house until she gets Gungun married to a rich family while Gungun and Rhiddesh taunt her for how shameless she can get after the party incident.

Maya says she will find a nice family for her daughter while Gungun pushes her away and drags Maya out.

Maya declares she will not go anywhere and kill herself if someone tries to separate her from Gungun and falls on the floor.

Later, Akriti and her father arrive at the Kulshresthas while the family is thankful for whatever happened as they got Akriti as a daughter-in-law.

Meanwhile, Akriti calls Garima and expresses her absence while saying her marriage might face issues as her mother doesn't live with Akriti.