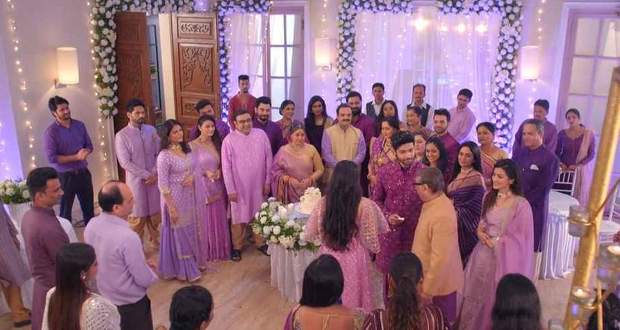 Meanwhile, Gungun hesitantly asks Anubhav if she should leave the job but Anubhav denies it as he trusts Gungun more than himself.

On the next morning, Gungun sees her colleagues decorating the office but no one knows the occasion.

Later on, Armaan comes with the chairman of Jeet Network and tells about the achievements achieved by the company.

The chairman welcomes Gungun to the company and promotes her as chief editor of Jeet Network as per Armaan's recommendation.

He also announces about Armaan leaving for the US as he got a job offer from a renowned company.

Meanwhile, Armaan informs everyone that he is leaving because the time has come to leave as Gungun doesn’t need him for Agrima magazine.

Armaan requests everyone to support Gungun and give her time to settle.

Gungun thinks the reason Armaan is leaving is because of her.

At the same time, Gungun gives a speech about how Armaan taught her to make every moment of her life the best moment and shows him gratitude for giving her confidence and Anubhav.

Gungun expresses her wish of not wanting Armaan to go as a friend but professionally she will not stop him.

Meanwhile, Armaan and Gungun go on a walk while Gungun tells him about her nature one year ago.

Armaan expresses his wish of meeting Gungun before when she was not independent and Anubhav was not in the picture.

Gungun inquires about his flight departure time while Armaan informs him about the flight leaving early morning tomorrow.

Armaan invites Gungun for dinner but laughs it off when he sees Gungun puzzled face.

Gungun calls Armaan his best friend and tells him she will miss him and that he was the only person she could gossip with.

At the same time, hearing Gungun say she will wait for him in India Armaan interrupts her saying he will send the driver to send her home.

Meanwhile, Armaan cancels the restaurant reservation with a heavy heart.

Gungun reaches home and meets Anubhav who teases her for forgetting her husband.

However, Gungun tells Anubhav about her promotion and Armaan leaving for the US while Anubhav's happiness has no bounds as both are good news.

© Copyright tellybest.com, 2022, 2023. All Rights Reserved. Unauthorized use and/or duplication of any material from tellybest.com without written permission is strictly prohibited.
Cached Saved on: Wednesday 25th of January 2023 08:53:10 AMCached Disp on: Thursday 9th of February 2023 08:49:35 AM