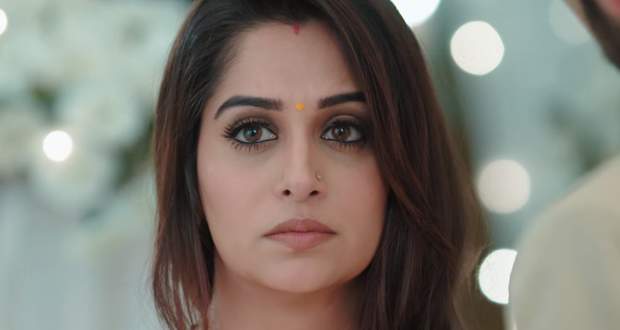 Rohit saying he is shut just because of Veena. Rohit gets really emotional while Sonakshi tries to calm him down.

Rohit says the woman died just after giving birth to Pooja. He knows that Veena’s life revolves around his husband but Sonakshi wants him to see it from Veena’s point of view.

Sonakshi makes him understand that truth comes out no matter what you do. She wants him to realize that Veena will feel cheated when she will learn the truth.

Sonakshi promises she will never reveal the truth. Sonakshi realizes that somebody has heard their conversation as Rohit had closed the door.

Later, Pooja announces the winners as Veena and Naren while Veena praises Naren for always supporting her. Rohit points to Sonakshi that Veena’s life revolves around Naren.

Also, Veena calls Sonakshi and wants Naren to wish her. Naren talks politely with Sonakshi and Veena gets happy. Later, Nishi gets angry at Rohit for telling Sonakshi.

Rohit declares that he trusts Sonakshi and she overhears. Nishi explains why she supported his brother and accepted Pooja as their own daughter.

Rohit and Sonakshi go to Suman’s place and Suman hints them to have kids. Later, Sonakshi is on her way to the shoot when she hears the cat’s weird noise and scary eyes.

Upcoming Kahaan Hum Kahaan Tum episode update: Sonakshi receives a message stating that he knows the reality of Naren and will reveal it very soon.