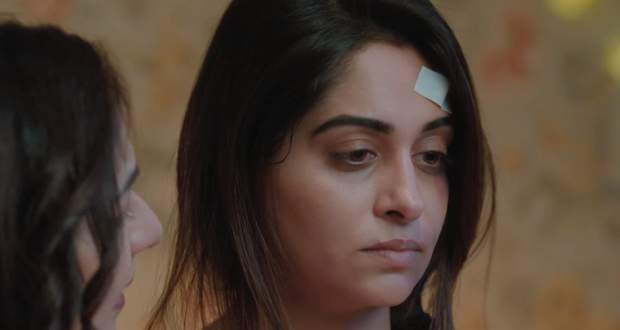 Today's Kahaan Hum Kahaan Tum 12 Feb episode starts with Sonakshi gaining consciousness and Suman consoling her. Pari gets angry at the Sippy family and decides to destroy them.

She asks Rahul about Rohan and Tanya’s location and decides to give the pills to Tanya. Later, she reaches the restaurant where Tanya and Rohan are present.

She mixes the pills in Tanya’s food but Rohan confronts Pari and tells she didn’t let Tanya eat the food. He further asks her to stay away from him.

After a few days, Suman finds Sonakshi sitting in the dark and tries to comfort her. Sonakshi states that she was living in some fantasy world and that love is a waste of time.

She decides to stay focused on her career and throw emotions out of life. Meanwhile, Rohit is devastated and is drinking heavily while stating he loves Sonakshi.

He states that nobody can take Sonakshi’s place while Sonakshi burns Rohit and her photograph. Later in the morning, Sonakshi is bombarded with questions from the media about the separation.

The TV actors on shoot also talk ill about Sonakshi. Sumit and Sonakshi give them to answer while their co-actors apologize. Sonakshi further states that she can’t forgive Rohit.

Nishi gets worried as Rohit is in a drunk condition and an important patient leaves after witnessing the scene. Later, Sonakshi confronts Rohit about not visiting her after her accident.

Sonakshi challenges that she will beat him in the race to gain more money and status. Rohit acts of being irritated by Sonakshi and hopes that she gets successful.

Upcoming Kahaan Hum Kahaan Tum episode update: Sonakshi can be seen in a changed look in a police station after 4 months.